Even before we had finished our home study for Jonathan's adoption, we had already been filled in on Post Placement Reports.  Each country has different requirements, but all of them have some "accountability" built in so that the adoptive family reports back to the birth country as to how the child is doing in his new home.  The requirements for us are reports done at 6 months home, then one year, 18 mths. and 2 years.  As of yesterday, Jonathan has been in our home for 5 months.  wow.  Our adoption agency is on the ball and had us do the home visit with a social worker for his 6 month report earlier this week.  This is to ensure that the report can be finished promptly (the agency social worker writes it up and attaches pictures that we provided of Jonathan in our home) and have plenty of time to make its way to Bulgaria before it is expected.  Adoptive families being faithful in this helps to assure the dependability of the program for years to come.

I completely enjoyed the visit with the social worker because it made me think through the past five months very clearly.  The social worker had a checklist of sorts to establish Jonathan's levels of capability in many areas.  That gave us a very tangible way to see how far he has come in just 5 months!!  The first list of things were accomplishments that most 3 and 4 year olds can attain.  MANY of them were not true of Jonathan when he joined our family, but ARE true now.  Praise the Lord for that!  How amazing.

This won't go into the report, but when I have stopped to think back over the months, here is how I categorize them:
First month -- Difficult, but lots of learning was going on.... language learning, new skills learning, learning the routine, learning roles within the family, etc.
Second month (or maybe for the next 6 weeks) -- More difficult because of direct defiance at every turn... from refusing to sit at the table and cooperate with our school schedule and any activities, to refusing to put on his seatbelt in the van, to ..... just about anything that I required of him.  I'm not sure that I've ever prayed for more wisdom, patience, and understanding love than I did during those weeks.  It peaked one day--- That day is vividly etched in my memory (but I DO hope that Jonathan has forgotten it because it was not a happy day!)  At that one huge climax apparently the Lord knew I'd reached my limit, because miraculously, Jonathan has never had another tantrum since then.  I needed a miracle, and He gave me one.  I was on proverbial pins and needles for the following weeks, just waiting for something to set him off.  I was too apprehensive to say that we'd passed a huge milestone because I wasn't so sure that the tantrums had ceased; -- I thought maybe I was just getting a well appreciated "breather!"  However, he has been doing SO much better handling his anger.  I really DO think that we got over the hardest place on that day, and that we won't go back there again (naturally, I may be wrong!!).  Of course, that's not to say that he's never shown defiance since then-- because as I've stated here before, he is one stubborn little guy.  We clash directly every day about something or other.  But, the chanting, kicking, yelling, awful fits have stopped.  They stopped on that horrible day that has turned out to be the day of my miracle!
From about week 10 onwards--  things have slowly been getting better and more stable.  We struggle hard with "bonding and attachment."  Jonathan quite honestly is not very attached to us.  But, we have created several "rituals" like the go-to-bed-routine.  He misses it when something changes in an out-of-the-ordinary way....  like when Dan was in the hospital.  However, it's not really clear if it's honestly because he misses us (because it really doesn't seem like that is the case) or if he's just wanting the security of the routine....  or even more likely--  he doesn't like it when things happen out of his control, and he wants to stay in close control of his little environment.  But, regardless, he IS making progress in that area -- the area of beginning to give a little bit of affection, and receive it willingly.  So, we are rejoicing greatly in the times that we can look back and compare where he is now to where he once was  --- and see how far he has come.
Posted by Christy Jacobsen at 9:39 PM 3 comments:

Photography is a hobby of all of our older girls.  They are all getting really good at it, too!  Not long ago, Anna and Sarah were out with Jonathan and took the camera along.  From the looks of the shots they got, he thoroughly enjoyed being the center of attention!! 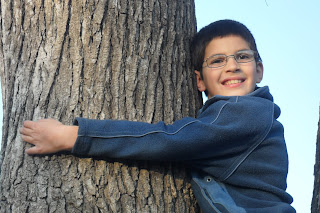 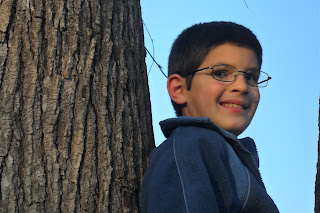 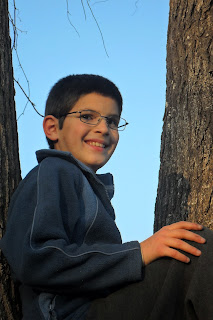 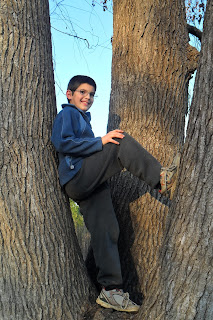 This one cracks me up.  Jonathan and Justin each have a pair of charcoal gray sweatpants.  Two different times now, Jonathan has put on Justin's pants.  He is totally oblivious to the fact that they are several sizes too large for him.  He never realized that they were Justin's pants until I told him!!! 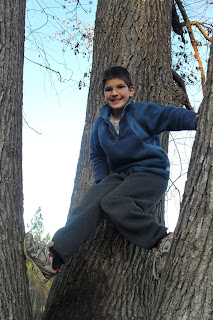 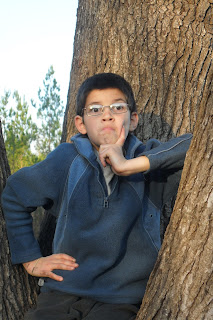 Posted by Christy Jacobsen at 10:05 PM No comments: