Not long ago, I was looking through my journal and a thought that had occurred to me in January came back so clear.  I am not an every day journaler, but it is so good for me to write down thoughts and prayers whenever I get a chance.... mostly because of the blessing that I get later from being able to come back and see what all God has done since then, and see what amazing answers He has given in the meanwhile.

Anyway, as I had recorded before in this post, God answered my pleadings for His intervention when I was having such a hard time with Jonathan.  It really was very clearly an answer to prayer, and Jonathan STILL has not had another tantrum since that awful last day....  Praise God for that one!!  (Do you hear my relief and gratitude?!?)

In the next couple of months that followed, there wasn't really another situation in which we saw night-and-day difference in his behavior.  We just sort of settled into better patterns gradually.  He slowly started to give in to things that were not his choice without too much of a fight.  Apparently, it really started to "click" that the consequences for certain behaviors were NOT going to go away, and he began to yield little by little  in different areas.

Since there was no absolutely obvious moving of the Hand of God, I subtly started thinking that it was just TIME itself that was making the changes.   -- You know the saying:   "Time heals all wounds."


Well, I realized one day in January that quite honestly --
that just isn't true!
Rather than try to think up different words to express what I was thinking back in January, I'll just quote my thoughts that I wrote out as a prayer in my journal:


"As time has gone by with Jonathan here, my enemy and the subtleness of the world tempts me to think that it is just TIME itself that is making the changes.  I should know better.
Yes, Jonathan is maturing.
He is responding to discipline.
He is learning self-control and how to handle his anger.
But, it's not happening by chance.
It's not just that time heals all wounds.
Time does not heal ALL wounds.
Lots of wounds fester;  lots of broken hearts become bitter;
lots of people never learn self-control.
Lord God,   IT IS YOU.
You  are doing this work.
It is not coincidence.
It's not that it just would have worked itself all out in the long run
no matter what.
It's not that Dan and I are such great parents
or that we just have such selfless love for orphans.
No, No, NO.
Let glory be given where glory is due.
It is you and you alone.
You are  using time in which to do it,
but it is Your  hand moving the hearts and the hands of time."
Posted by Christy Jacobsen at 10:36 PM 1 comment:

Look What Jonathan Can Do!

Well, yes, it has been forever since I added a new post.  Time started going by, and then it became easier and easier NOT to blog than to make myself sit down and record all that's been going on.

Not long after I made my last post, Jonathan had an appointment with the orthopedist, who happens to be a family friend!  We had a great time in his office, and it DID shed some light on what all has been going on with Jonathan over the years.  Thanks to some input from my sister (who is an O.T.), we'd already been having Jonathan do different kinds of exercises meant to help strengthen his arms and his legs.... mostly his left side.  And, we'd already seen a lot of improvement.

It seems that so many times you take a kid to a doctor and freely volunteer all of his symptoms to the physician, but when it comes time for an examination, the kid acts as if nothing is wrong at all....  all of those symptoms melt away, and the child acts like he's never been healthier.  How many times has a baby cried all night long only to go to the peditrician with an exhausted mother the next morning as soon as the doctor's doors open.....  only to smile and giggle and play like he's never felt better?!?  Well, I felt very much like that mother!!  Over the phone, I expertly told the orthopedist about how he limps, how his left foot always turns in, how he hitches his arm up to walk, how he couldn't bend his left leg outward, how his file said that he'd had a surgery in 2009, how his file said that he had had a dislocated pelvic joint as a baby, etc.  We went in to the office, had X-rays done, and Jonathan was sitting on the table in the exam room when the doctor first came in to see him.  Before he even asked Jonathan to get down, he looked at the X-rays.  Everything looked perfect.  He said that Jonathan's left hip joint looked better than the right one (which made me believe I'd read the file incorrectly!)  Then, he asked Jonathan to walk down the long hallway so that he could observe his movements.  With the doctor, a technician, and several nurses looking on, Jonathan very steadily walked down that hallway withOUT a hitch, withOUT a limp, and withOUT turning his left foot in AT ALL.  I was speechless.  They all looked at me with questioning eyes, as if to say, "...and what are you here for???"  Still dumbfounded, I walked back into the exam room with the doctor, and said, "You just have to believe me!  I've never seen him walk that way before!  I'll take videos at home and send them to you as proof!!"  So, to further complicate things and make it seem as if I'd totally made the entire thing up, the doctor examined his left leg and could NOT even tell at all where an incision was made in his left leg for a surgery during 2009.  I knew that it certainly wasn't obvious, but a doctor in Sofia had seen him during the mandatory physical required by the U.S. immigration, had looked at the area, and had questioned Jonathan on his surgery, so I just assumed that our doctor would see whatever that doctor saw.  Apparently, that doctor had only seen the record of the surgery in Jonathan's medical file like I had.... he likely didn't see a scar, either.  Our orthopedist honestly knew that I wasn't LYING, so he pieced together the things that we were saying and the things that we were seeing.

Jonathan was born with mild cerebral palsy which affects his left side.  That actual diagnosis was not in his file.  However, we knew from the description in his file that until the surgery, he walked on his left toes.  Our orthopedist suspects that his Achilles tendon was quite rigid and wouldn't allow his foot to step down normally.  When he walked, he most likely lifted his left arm up to give him more momentum in moving forward.  Jonathan's surgery in 2009 was done with 3 small incisions in the back of his Achilles tendon.  They made 3 little cuts into his Achilles which lengthened the tendon and helped his foot to be able to relax and step down normally.   Because he was only 7 years old at the time, his foot healed easily and well, and since the incisions were small, they are really not noticeable.  The surgery could have been done even earlier, but maybe the orphanage had not had the funds for it until that point.  Or, they just waited until he was about ready to start to school, and then decided that walking more normally would give him a better chance of doing well at school... being able to participate more freely in physical activities as well as prevent some inevitable teasing that would go with an obvious handicap.  Either way, he had spent a little over 5 years walking with a "clumsy gait,"  -- as his medical file stated (--their words!)

It's funny how your brain and body work.  Apparently even though he has the capacity to walk correctly now (as demonstrated in his perfect exhibition for the orthopedist!! :)  )  he most often just relapses into what habits he had set for those 5 years.  He no longer walks on his toes, but the limp is there and his arm hitches up when he is not concentrating on walking (or when there are no doctor's eyes viewing him!!  Ha Ha!)  He actually does it a lot more when he is in a hurry -- -which he was NOT in the doctor's office.  He sensed that it was very important to perform well, so he walked slowly and with care.

Another thing that the orthopedist suggested I watch for is to see if it increases as the day goes on.  In thinking back, I knew immediately that this was true.  The more tired he gets, the more Jonathan limps, and the more his foot turns in.  Again, even though he CAN walk normally, due to the cerebral palsy, his muscles get tired more easily, and he responds by taking the easiest way out -- dragging his foot more, and turning that foot inward.  It takes more effort to keep the foot in line than to let it turn in.... so in order to relieve some effort when he is tired, he just lets it relax more.

When we first met Jonathan, this was the only way he would sit: 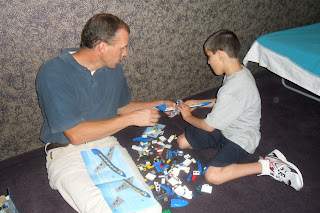 His legs really wouldn't cross into the "Indian style" position.  He only sat in the "W" position.  This picture was taken in our hotel room in Sofia the day after leaving the orphanage.
But, look at him now!! 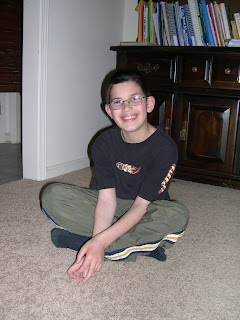 Again, now we know that he really could have moved his legs into this position, but it would have caused a lot of effort and discomfort on his part.  Because he'd never had therapy of any kind that we know of, he would have had to have decided on his own that he wanted to go through the pain of stretching those muscles out.  Well, that just wasn't happening!!  And, because he was very mobile (even though "clumsy"), he was in a LOT better shape than most of the kids in his orphanage!!  Even if there was lots of therapy available for children in that orphanage, he would have (understandably) been
at the bottom of the list.
But, with our pushing him and requiring him to do more, stretch more, sit in different positions, etc., he has quickly gained more flexibility and has even worked up some muscles that you can see and feel when he pumps his arm like a muscle man!!  :)  While he does like being able to run faster and have more strength, he does not like the "exercise routine" very much at all.  I haven't taught him the "No pain, No gain" phrase yet, but I don't think he'd appreciate it very much!!  :)
We just appreciate it for him!!
Below are some of his exercises.  He's doing toe-raises on the bottom step of the stairs.  His left calf muscle was quite underdeveloped.  It's still smaller than the right leg, but he's making progress. 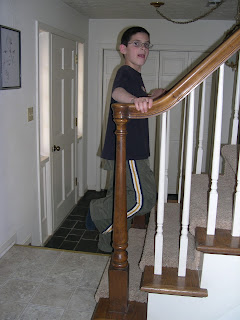 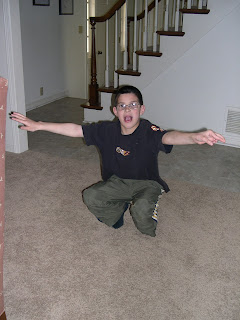 His mouth is always open and his tongue gets as much of a workout as the rest of his body!!  :)
He always like to show off his muscles.  When he first came home, we'd just chuckle because there were none there!!  Here he stuffed a ball into his sleeve so that he'd look VERY strong! 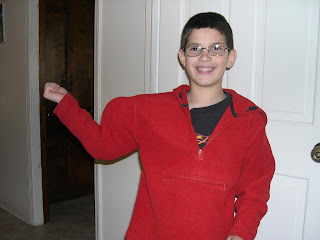 Posted by Christy Jacobsen at 9:46 PM No comments: