Here I am, trying to see if I can actually finish up the chronicles of Emily's first days with us BEFORE we hit the one year mark!!!  Truthfully, though, it was almost exactly one year ago this very hour that we first had Emily in our arms (screaming loudly!!)  Due to the time difference by China being on the other side of the world, even though it's still Dec. 8th, 2014 here, it is December 9th in China right now!!  What an incredible year it has been!  But, first to end the journey......

Friday, December 20th, 2013 --  We got up early and went quickly through the shower routine, packing all the last-minute items as we used them for the last time.  I was feeling a lot better, but still trying to take it easy so that I'd be able to last all day--- (this was going to be a LONG day!)  We took all of our luggage down to the lobby and checked out while it was still dark outside!  Then, we went to the restaurant for our last breakfast buffet in China!!

After we finished, we took one more little walk around the lobby and took some pictures. 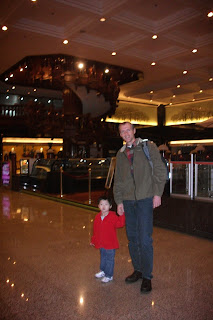 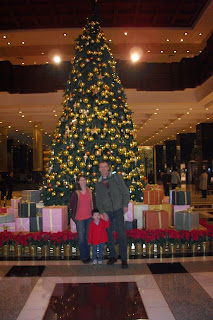 And, then, almost before we knew it --- we were off to the airport.  There was one special family who would be traveling all the way with us.  They were back in China adopting the little friend of their sweet Chinese daughter that they'd taken home one year prior!!  They were with us for both legs of our journey-- from Guang Zhou to Korea, and then Korea to Atlanta.  From there, they would take another short flight back to their home state, but Dan's parents were going to pick us up in Atlanta to drive us back home to Alabama.

We'd predicted much of Emily's behavior and were right on target!  She wanted nothing much at all to do with me in the airport, sticking VERY close to Dan, but still giving him fits at times.  She knew that something was up, and she wasn't sure what it was, and didn't like the fact that she wasn't in control of it!

Emily hated the seat belt and screamed when we made her stay in it!  (We had certainly anticipated that one!!)  We were able to get her interested in a few snacks that she had proven to enjoy.... one being raisins in the cute little snack boxes.  She loves to pick them out one by one (which takes LOTS of time, and we certainly had lots of time on our hands!)  Cheeri*s and Fruit L00ps were another thing which she finally had discovered were yummy once she got over her stubbornness and decided that she'd give them a try.  We also had come armed with several snack milk boxes that she liked, as well as some pretzel-type crackers.  And, when the airline food arrived, she was interested in what was in all the little packages.  So, food itself kept her busy a good part of the time.

When we got to Korea, we walked around a LOT.  There were several kids' play places, and we spent time at each one of those.  We hung out a good bit with the other adoptive family as well.  Our lay-over was about 6 hours, which certainly was not ideal.  We were quite worn out by the time we could get ready to board our second and last flight. 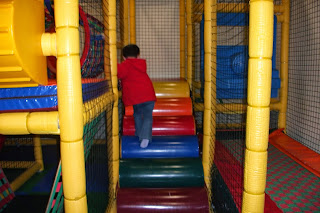 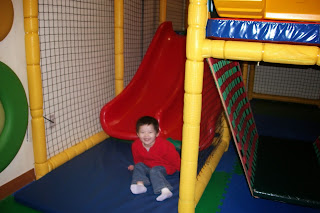 Here's the plane that would take little Emily to her new country!! 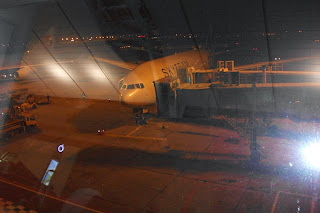 The flight from Korea to Atlanta is more than 13 hours long.  That seems like an eternity when you are in the middle of it!!   But, in our years of going back and forth across the Pacific, we'd chosen that flight more than once, and it has come to be our preference.  At least you don't have to clear customs on the west coast and then STILL have another flight or 2 left staring you in the face before you see Alabama again!!!

We were so tired that we all 3 did sleep some.  Once we all fell asleep at the same time, and Emily rolled over from our laps where she was stretched out and fell in the floor!  She did her share of fussing a good bit, and of screaming some..... but over all, it could have been much worse, I guess.  We basically tried to do as much pleasing her as possible!!  One of the social workers had reminded us that you can work on dealing with behavior issues later..... the name of the game on the plane was survival!

We were overjoyed to touch down on American soil!!  Going through immigration took a good long while.  Finally we proved that all our paperwork was in order and that we were legally bringing a new child into the country!!  So-- we headed out to find Grandma and Grandpa!!! 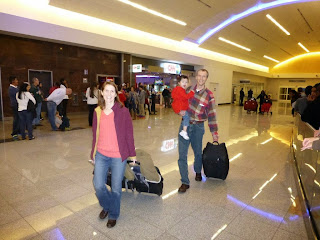 In this picture I was hanging on to Emily to keep her from following Daddy
into the men's restroom!!  She did NOT like having him out of her sight! 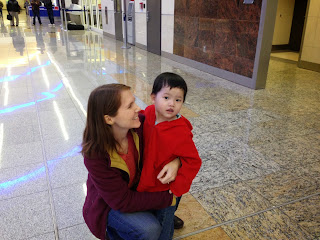 Here we are -- somewhat haggard and worse for the wear, but back in America!! 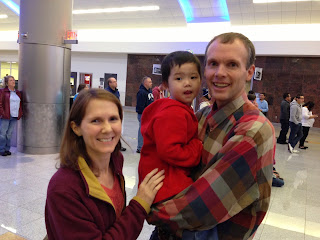 Adoption agencies warn parents that there is a great temptation to think that-- now it's all over!!  We have achieved our goal..... the adoption is FINISHED!!!  All the hard work is done!!!

The truth is, it is just beginning!!