5 Weeks home....  I actually had lost count and thought it was six!  Ha!  It's been awhile since I wrote about progress going on here.  The past 2 weeks or so have been full of ups and downs.
First of all --   "Teddy" is becoming "Jonathan Theodor Jacobsen."  We are slowly changing over to his new name.  When we taught him the phrase, "What is your name?" we all would practice with our whole name-- first, middle and last.  So, he learned right away that his new name was Jonathan Theodor Jacobsen.  However, he always referred to himself as Theodor; the nickname "Teddy" was what he was called by the orphanage staff.  We wanted to keep "Theodor" as his middle name, and -- since he was already 9 years old when he joined us, if he really wanted to keep his name, then that was OK with us.  In the last week, though, he has started referring to himself as Jonathan Theodor, so that's what we've been calling him as well.  It's a mouthful, but hopefully soon we can switch to just "Jonathan" if he is satisfied with that!

Next, thanks to my sister, Cathy, who just happens to be an O.T. (how much of a blessing is that?!) , "Jonathan Theodor" has started with some therapy!!!  Cathy evaluated him last weekend and gave us some ideas that we've started putting into practice. 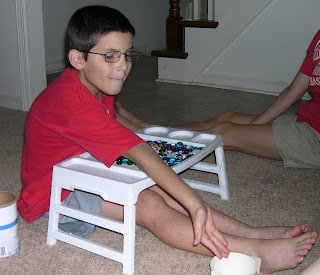 Here Teddy is putting the little glass beads into a container that is just out of his comfortable reach.  It forces him to stretch his hips and legs.  Cathy is working to make most of his therapy into game-type things.  If we demonstrate it for Teddy, his competitive nature makes him want to do it just like we did!

One other good thing is that "Jonathan Theodor" is doing really well in school.  That is NOT to say that he is enjoying it.  In spite of the break through that we had that one week, the weekend always messes things up!!  He goes 2 days without school, and goes back to his old protests every Monday.  But, quite honestly, he is making a lot of progress.

The "downer" side of the days since I last posted is that Teddy really has ramped up the "testing" behaviors.  It's fully expected, fully understandable, and fully a patience tester!  :)  Not only has he been having some issues with Dan and me, but he also got to the point where he'd been around everyone in our household long enough to know exactly what it takes to aggravate others (brother and sisters) ... and he hasn't always made himself very endearing to some of them!

﻿
Now, it's very, very easy only to look at the testing and the irritations as negatives.  But, that is simply just from a worldly perspective.  Truth be told (God's truth, that is!), every single time that Teddy challenges Dan's or my authority is a gift of an opportunity to teach a little boy what consistent, loving discipline is.  When I keep that  perspective, being consistent and loving in my discipline comes easier.  When my eyes are NOT looking from that perspective, then life is not pretty.  Over the course of the past 2 weeks, there have been times that I've been floored by obvious answers to my prayer for God to pour out His peace in my heart, and give me His unconditional love for a little boy who has never experienced it.  Grace... it's only God's grace.  Other times, I will confess, I have been floored by ugly examples of my pride that pull me into a power struggle with Teddy that need not be there.  That, too, turns out to be grace again -- grace of a loving Father who cares enough to expose the pride that is obviously there, and teach me to let Him root it out.  And then, the irritations that Teddy has recently enjoyed bringing about in his brother and sisters -- from God's perspective -- those things can be such good opportunities to let God build Christ-like character in them, too.  Tough---  but SO rewarding if we'll all yield to the Spirit and His prompting to respond in a Christ-like way. 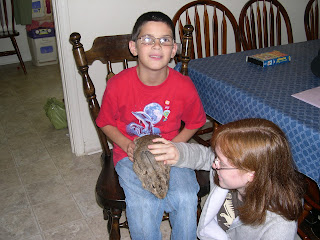 Teddy is learning to be gentle with the bunny rabbit! 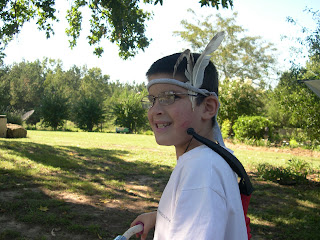 Our little Indian -- complete with red berry war paint made by Justin!  Teddy wants to do whatever anyone else is doing.... even if he doesn't exactly understand what it is that they are doing!  Ha!  He had no idea whatsoever why he was putting chicken feathers in his "head band," but if it was good enough for Justin, it was good enough for him!!  :)
Posted by Christy Jacobsen at 10:13 PM