Last week, Rachel asked me if I knew what important day would be coming up soon.  She laughed and said that it would be the one-year anniversary of my last blog post!  :)  Ha Ha!
Oh, the number of posts that I've written in my head!!  None of them ever made it here, though.  But, I've had a very important reason for telling people that I really  would  start up the blog again soon!  Here's the cutest BIG REASON that there is!! 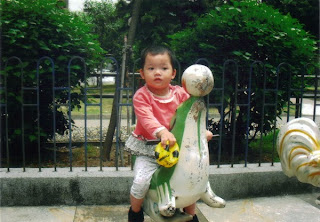 Introducing....  Emily WeiTong Jacobsen
Within the next couple of months, Dan and I will be making a trip to China to add the youngest member to our family!  One year ago, when I was posting the October 13th post of 2012, we had already started our application for another adoption, and were in the beginnings of a new home study.
I'd love to go back and chronicle the year that I've missed blogging.  But, honestly, if I tried to wait until I found the time to tell all that has transpired in this past year, it would never get done.  Hopefully there will be time here and there to fill in a few gaps, but I'm not promising anything.  I couldn't even manage to get this post done when I wanted to.  I started it yesterday, which really WAS the one year anniversary, and here I am now a day later trying to finish it up!  As we get closer to actually making our trip, I fully intend to keep up so that I'll have Emily's adoption journey written down to look back on later!!
﻿
Posted by Christy Jacobsen at 9:10 PM