Those who inspire our hearts~

The other day I was thinking about the turns in the road that our family's life has taken over the past 4 years.  God used lots of things to lead us back home to Alabama, and He has used several things to lead us to start on the adoption journey as well....
My first trip to an orphanage in Mongolia made a huge impact.  An American lady that Dan and I had known since before we were married was living in the capital city working as a pediatrician in a Mongolian hospital.  She saw multiple children abandoned there and over the course of time, felt God's leading to start an orphanage.   http://www.childrensplacemongolia.org/  Her co-worker is an OT, and in the past years, they have started a development center as well.  My older girls and I went to visit and play with the children while we were living in Ulaanbaatar, and wanted to take every single child home with us.  At that time, it just wasn't feasible for us to adopt for many reasons.  Within a year, though, God had brought us home to America, and our circumstances had changed. 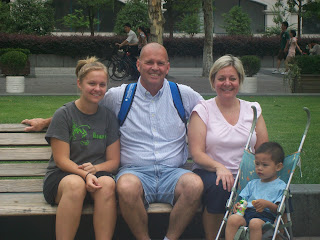 At about the same time, some of Dan's friends from growing up years had adopted a little boy (Will) from China, and were working to adopt their second Chinese son (Sam).  We visited them and were so floored by the impact the adoption was having -- both in Will's life, and in theirs.  Will is blind, and his little life has been transformed from one spent almost entirely in a crib to attending symphonies and naming the individual instruments he hears being played.  His family is quick to tell us that it's not just his life that has been blessed....  THEY are blessed so very much by the gift that he is to them.  And then, they were blessed even more when Sam came to join their family.  The picture above was taken in China with Sam and one of their 4 biological daughters.  After spending time with their family, our kids began to ask why couldn't we adopt?!  We started praying about it, and the Lord started prompting us more and more in that direction.  God's plans are so incredible....  who would have thought that children living in Asia in 2006 in orphanages in Mongolia and China would be impacting a little boy today who is living in Bulgaria?!  Yet, God weaves people and situations into our lives to bring about His providential ends.  And, it's incredible providence!

Posted by Christy Jacobsen at 10:02 PM