Back at the hotel again, we played in the room with Emily.  She had felt a little more comfortable yesterday, and was loosening up even more today.  It is very interesting to see her in action.  She still doesn’t smile at us, doesn’t want to be touched (except for being held) or tickled or have any peek-a-boo type games ---typical things that might bring a smile or laugh.  What DOES make her smile is being “naughty.”  She basically goes around the hotel room, finding anything to do that gets a reaction from us.  The biggest reaction so far comes from Emily’s trying to vigorously knock the lamp off the coffee table and watch it crash to the floor.  The next thing is when she climbs up in the chair beside the window and grabs the pull “pole” of the curtain sheers, swings it back and flings it hard against the glass.  And, finally, if the laptop happens to be on the desk from when we last Skyped with our family at home, she will throw anything at the computer, or if all else fails – make a dash for it and try to smash it off the desk herself before we can reach it.  I’m pretty sure that if we leave this hotel in 9 days without owing them money for damage to windows or furniture, it will be nothing less than a merciful act of God!!

Immediately following all of these behaviors, she breaks into a huge grin and laughs and laughs at us while we are running to make a grab for the lamp, remove her from the chair near the window, or quickly put the computer away.

(Side note here --- This is one of the main reasons that my blogging came to a big halt while we were in China.  If we wanted to keep the computer intact, we basically had to keep it put away while Emily was awake.  And, when she was asleep – I was usually asleep, too!  The only short exceptions were when I would Skype briefly with the kids back at home from one end of the room while Dan would keep her occupied about 15 feet away.  He would take out any toys that would interest her and work to keep her interested while I pointed the laptop’s camera toward them so that the kids and grandparents could see her play!!  If we didn’t keep the Skype sessions short enough, she’d get bored with what she was doing and the computer was highly at risk!!!)

In watching her in antics, I just have to wonder if maybe the only attention she would ever get at the orphanage was negative attention.  It seems SO clear that she is trying to do anything she can that gets a negative reaction from us.  It can be draining!!  We began spending a good bit of time OUT of the room, walking around the hotel (out of crowds so that she isn’t scared.) 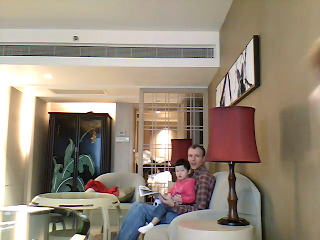 Here's a video call snapshot that the kids took from our computer at home while we were on Skype.  The lamp that is in the foreground is the one that is currently in constant danger. 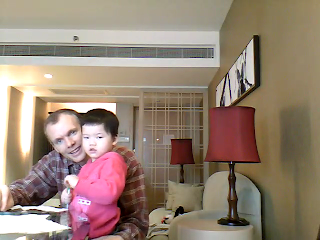 Here's another one.  We were getting a little bit braver in allowing her a closer range, but Dan wasn't letting her out of his lap, and I was sitting even closer to the computer to ward off any flying objects if she managed to throw anything!!!