After lunch, we went back to the hotel for a while to let the kiddos take a nap.  Then, later in the afternoon, we had to go to the district police station for more paperwork and another picture.  Again, back out in public, Emily was scared.  The place was pretty crowded as all adoptive families who were working on the same time frame (gotcha day on Monday and an appointment with the consular’s office to obtain a visa next week) needed to be there the same day.  So, we again met up with other families that we had met/seen at the Civil Affairs office on Monday.


Dan and I had been looking forward to seeing one family in particular.  When Emily was brought to us on Monday, she was wearing the cutest little ladybug backpack.  I thought how very nice it was, and was surprised that the orphanage was giving her this gift to take with her.  Just before we had left the civil affairs office, I looked inside to see what was in it.  There were some snacks and a photo album.  I opened the photo album wondering if they had collected some pictures of Emily taken in the past, and realized that it held pictures of another adoptive family.  It was obvious that the caretakers had given Emily the backpack that was meant for another child.  I gave it to Miko to see if she could find the right family, but they had already gone.  In looking for them though, we discovered that another little girl was being adopted that week from Emily’s orphanage.  We kept the backpack and were waiting until we might see them again.  Families often send a photo album of themselves ahead to China hoping that the orphanage workers will show their child the pictures and talk with them about the family that will soon come to get them.


So, once we were at the police station, Miko found the family (a very nice Canadian couple), we returned their backpack, and introduced ourselves.  We didn’t have a long time to visit with them, but what little time we did have was so very interesting!  Their daughter was younger than Emily, but so many of their behaviors were exactly the same!  The environment in which they had lived had certainly shaped them!  We “compared notes” on their medical files, too, finding out that they were almost identical.  I would now love to see other children’s files from the same place to see if they are all recorded that way.  Very interesting.


But, soon we were called to take our place in line and had to leave the conversation.  Unfortunately, the other couple was not staying at the Garden Hotel, and they were leaving Guangzhou the next day because the Canadian consular’s office is in Beijing.  So, we weren’t able to see them again.


As if we needed a repeat, Emily screamed through the photo session!!  Again, the photographer wanted to try to calm her down and get a better picture.  Again, we persuaded him that it was pointless, and that the people in line behind us would really appreciate it if we just took our screaming, panicked little girl and left!!  J 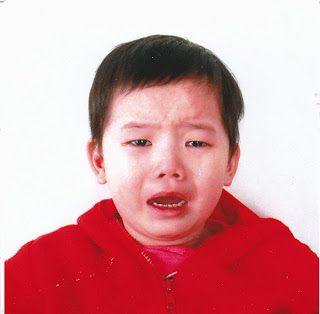 
Posted by Christy Jacobsen at 7:06 PM