( Yes, I know that it has now been 10 months since Emily came home, but I am determined  to get this down for us all to be able to look back on..... especially to see how FAR Emily has come in these months!!  So, after many months of silence--- I'll continue the story!  The only way that I could manage to remember any details is that I started making some notes of things I didn't want to forget about our trip as soon as I realized that I wouldn't be able to post much of anything while we were in China.  So, now I just refer to things that I jotted down to help me remember!!)


After our normal morning routine, we joined all the LifeLine families downstairs in the lobby and went out to board a bus.  Today was a day for souvenir shopping and sight seeing.  First we went to a large shopping center/mall that was devoted entirely to jewelry.  You could buy pearls, jade, and about any other stone you could imagine in any quality you could imagine.  It was impressive.  The place was several stories high.  We didn't buy a whole lot, but we did enjoy walking around with the other families and getting to know them and their stories.


Emily was captivated by the kids of several of the shop owners who were enjoying the aisles of the shopping center by zooming around on their scooters and other riding toys.  They were her entertainment, and when they saw that they were getting attention, it made them even more daring!! 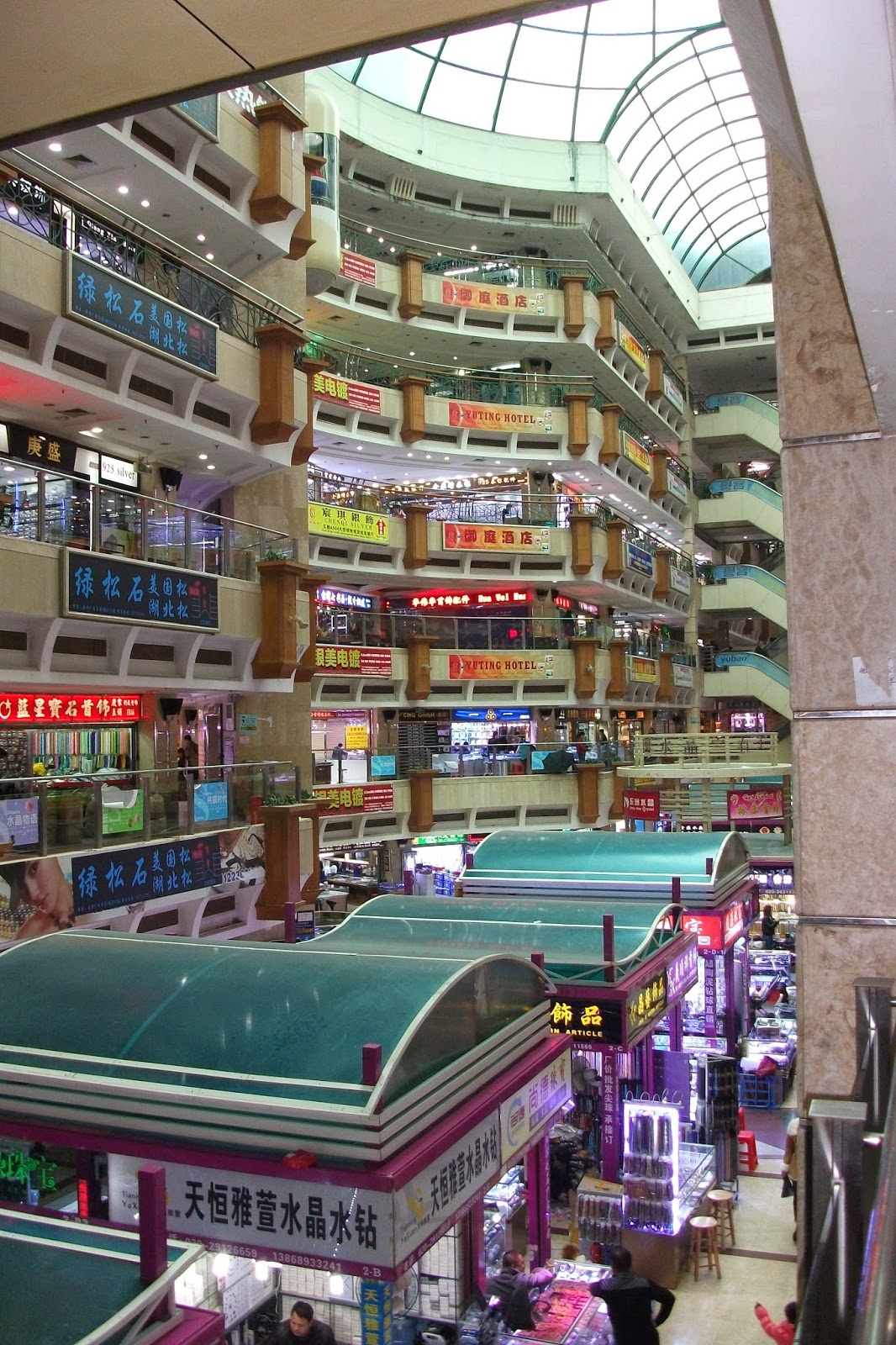 It started raining as we were boarding the bus again, and so our next stop was sight-seeing in the rain.  We went to the Chen Clan Academy Museum.  Emily had made it to the end of her rope, and between her being difficult, and the rain not allowing us to enjoy the pretty sights, we were slightly strung out by the time we left.
Had the circumstances been different, I would have really enjoyed watching some of the local artisans at work, and reading more about crafts and the history of the Guang Dong province.  As it was, if we let down our guard for one second she would have grabbed anything in sight and would have been set to destroy it.  That was just too risky, so we really couldn't relax.  Emily was obviously tired, so we were very ready to go after a short time of looking around. 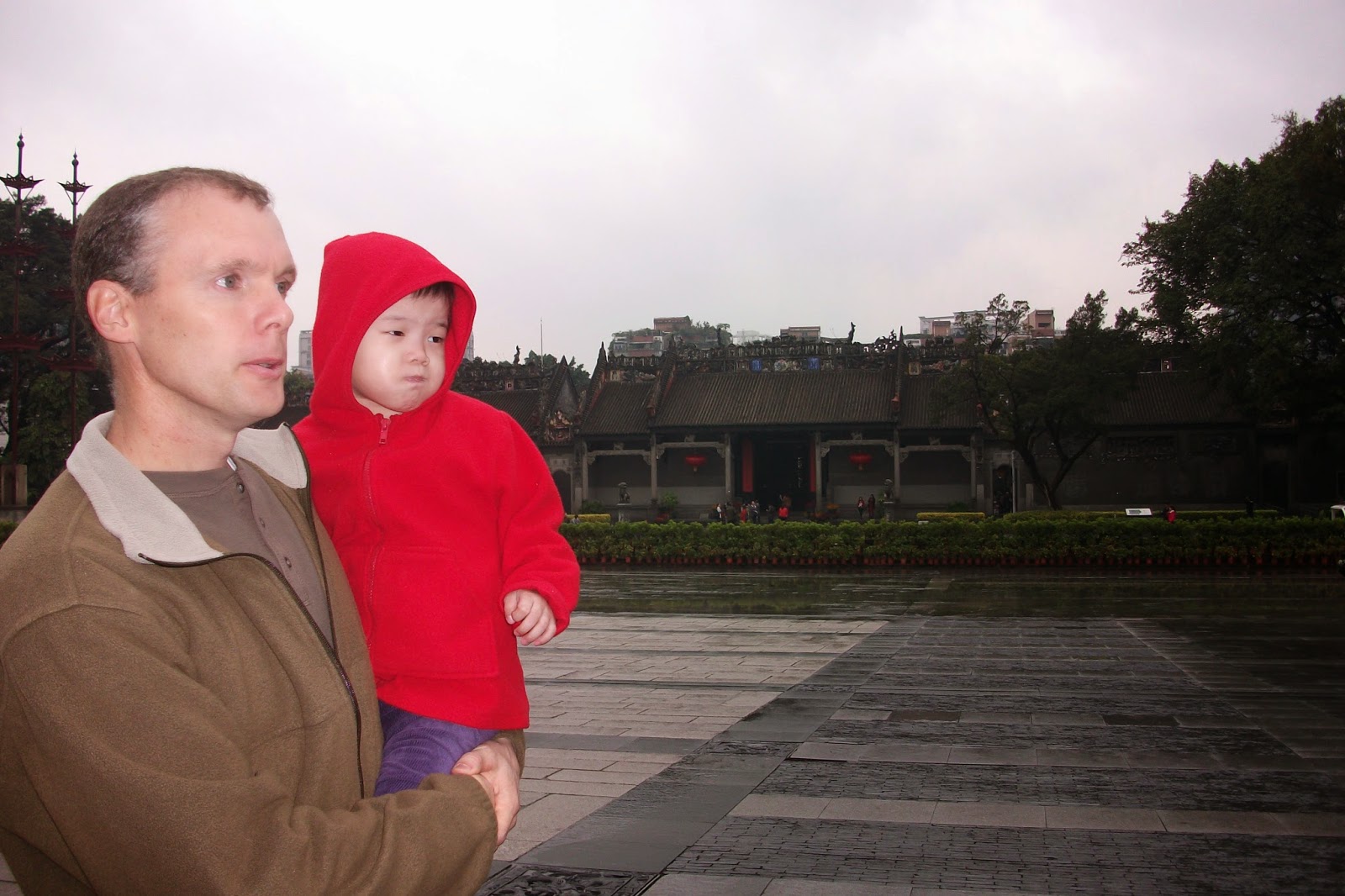 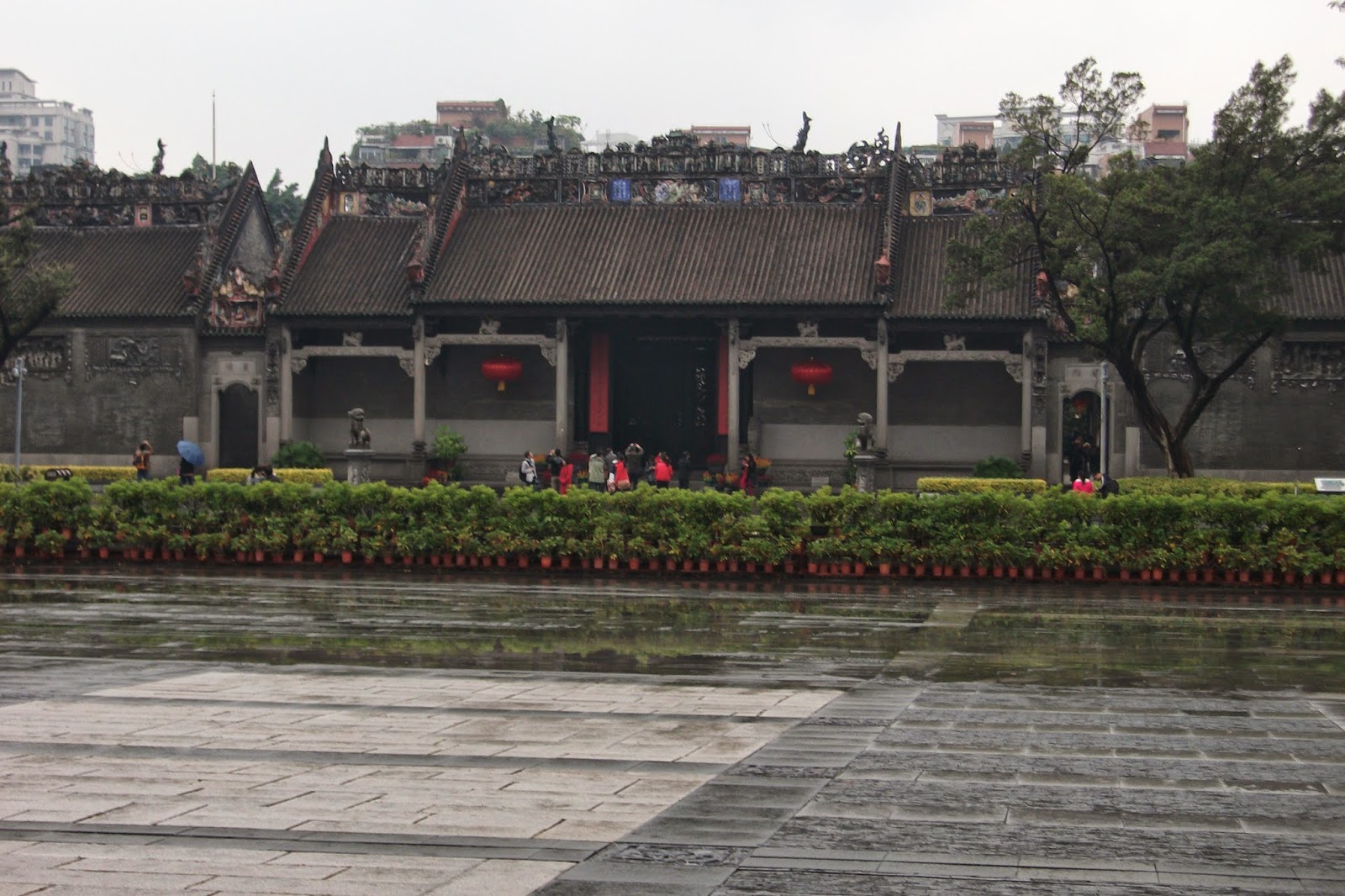 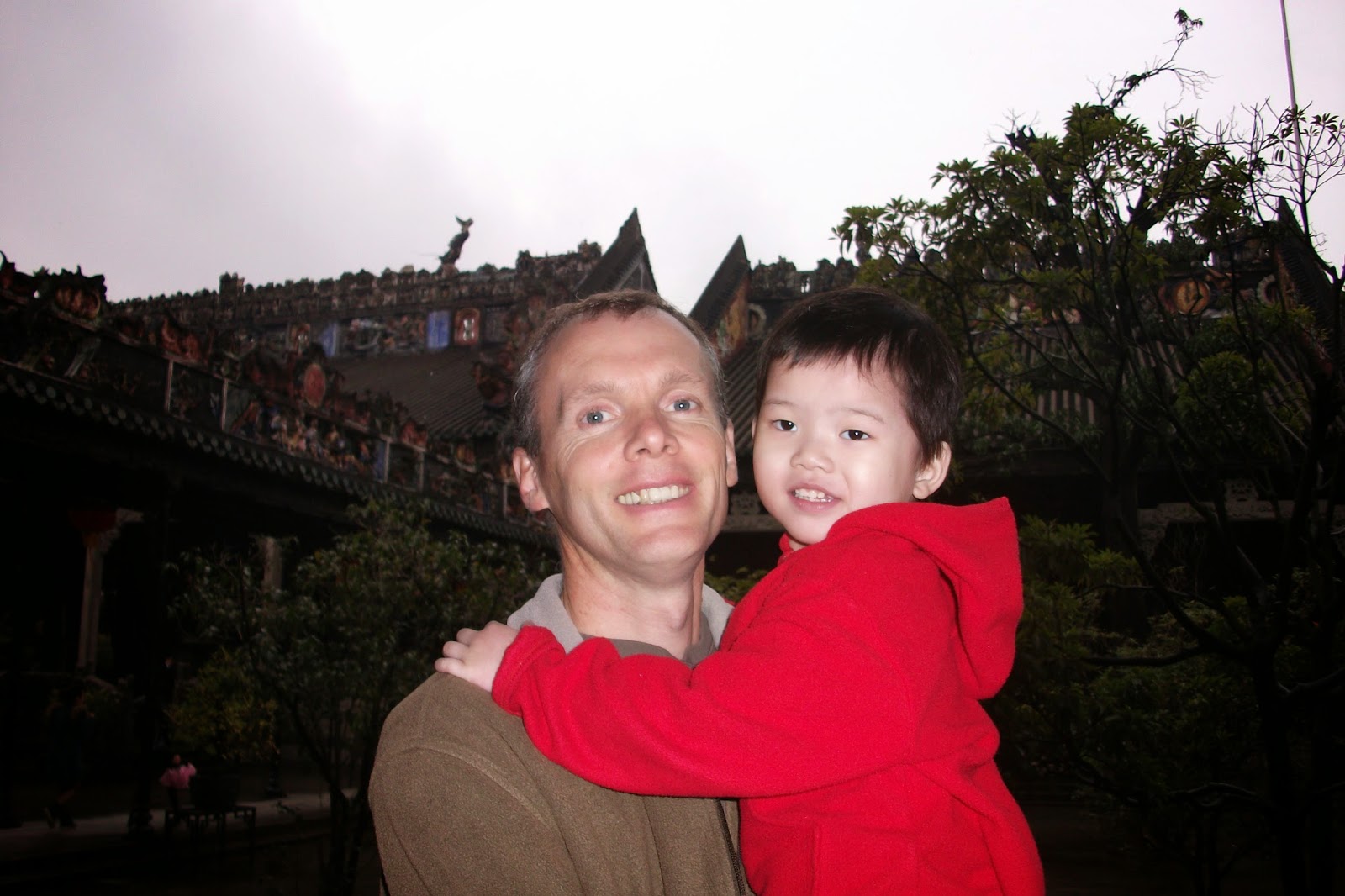 This is almost a smile!!

Emily was so tired when the bus took us back to the hotel that we just quickly bought some raisin buns and another pastry from a shop on the main floor, and ate a quick lunch in our room.  Neither Dan nor I were up to trying to handle a lunch outing!  Emily took a nap, and then we had a snack in our room.  We right away found something else that she will eat.....  vanilla cream cookies!! 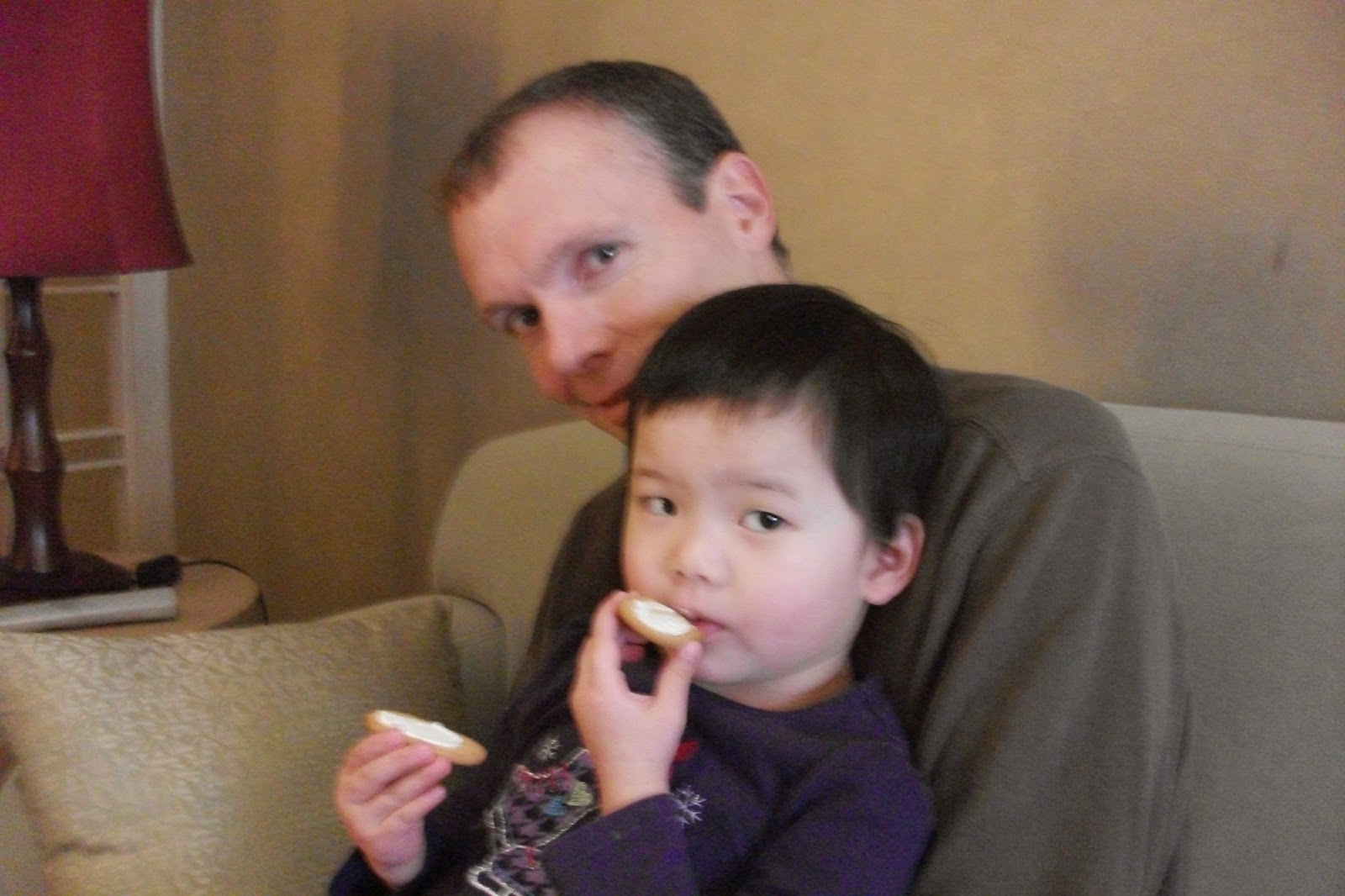 And, she obviously had eaten them before, because she knew to take them apart and eat the yummy cream part out first!!  :)  Whatever might be the reason that she is mostly refusing to eat---  it stopped when she saw the vanilla cream cookies!  No refusals there!  :) 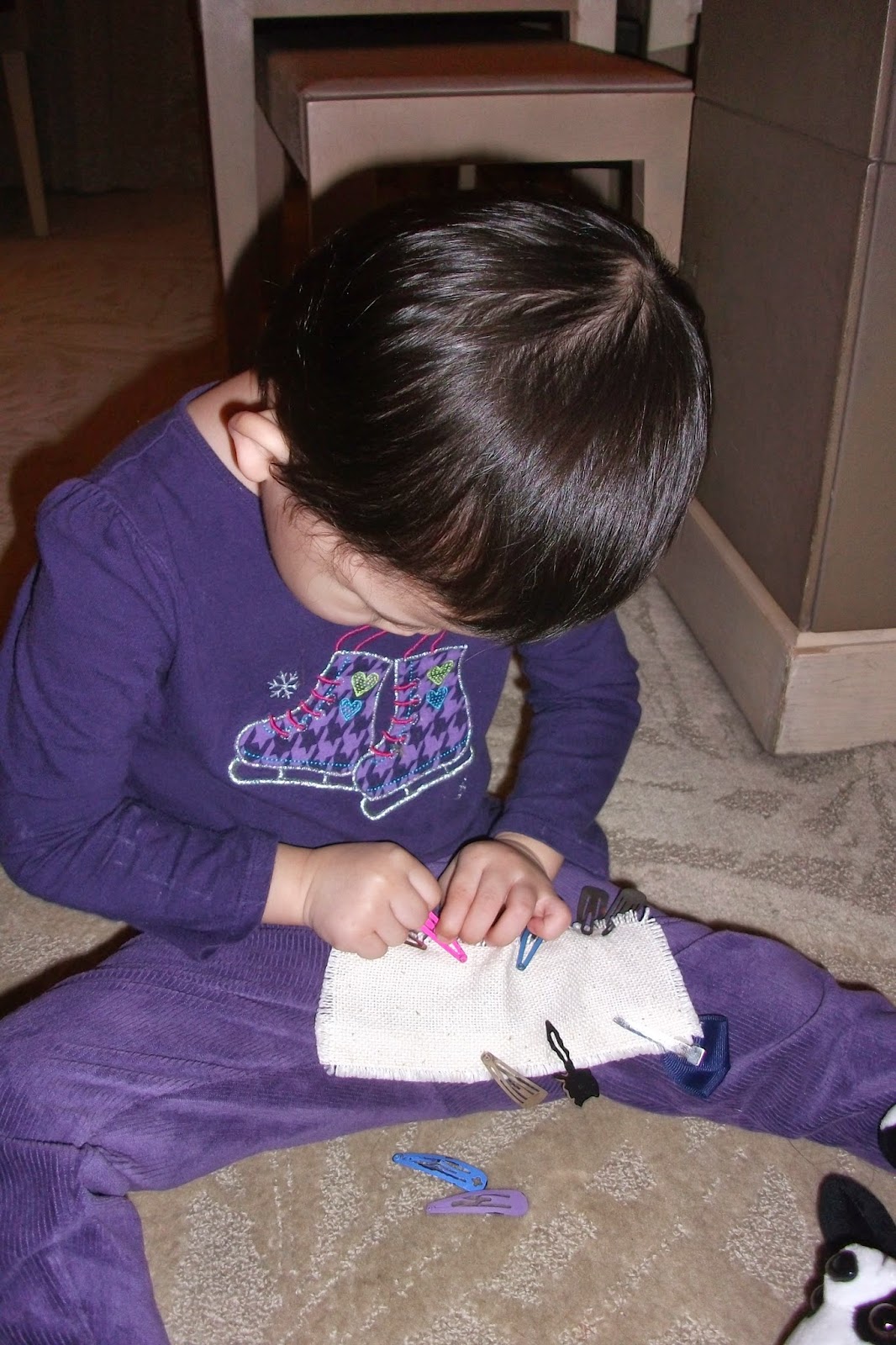 We spent some time playing inside while she was in a happy mood.  I brought all of these girly hairclips thinking that I could try to make her look a little bit more like a girl in spite of the boyish short hair.  Well, with the exception of a few hours on the first day, she has absolutely rebelled at any girly hair things going into her hair.  HOWEVER, I am most happy that we brought them along, as they've turned out to be the best play thing ever!!!  She loves to pay attention to detail (which is a really good sign along the attention span side of things!) and she will spend quite a lot of time taking them all off this piece of fabric, then arranging them back onto it.  Hey -- if it works to keep her occupied with something that is not destructive, we love it!

As always, we spent a good deal of time going up and down the escalators and stairs, and are about to wear ruts into our trail around the lobby.  We pretty much had to stay indoors, though, as it was still raining.  For supper, we ate local Chinese with the V. family at a nice restaurant in the hotel.

Posted by Christy Jacobsen at 10:03 PM