I was determined to post some fall pictures before we got too far into the Christmas season!!  Each year our family generally carves a pumpkin sometime toward the end of October.  It's never your "normal" carved pumpkin  with triangle eyes and nose.  Usually anyone who would like to draws a picture, we choose the favorite, and Daddy carves it into the pumpkin with help from everyone else. 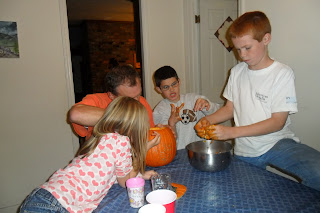 This year, Jonathan was in the middle of the fun.  He wasn't too sure exactly  what was going on, but he decided after a few minutes that he DID like the goopy mess.  At first, he wasn't too sure.

The younger kids helped Daddy, and the older girls helped me in the kitchen while we tried a new recipe of home made carmel.  After the pumpkin was finished, we sliced apples and had carmel sauce for dipping! 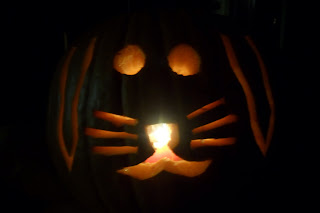 Here is the finished product!
This year it was in honor of one of the much-loved pets around here.... 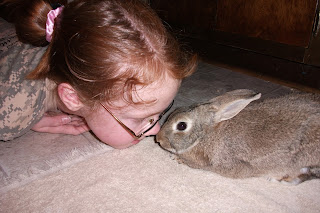 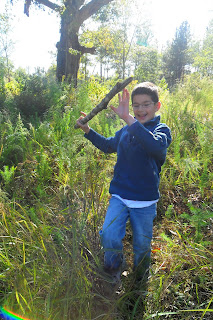 Jonathan continues to love being outdoors. 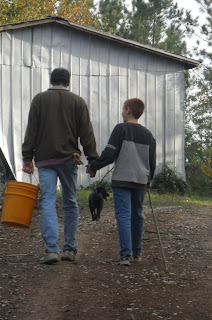 Justin and Daddy on a walk, returning from "The Back 40."  I love that this picture shows Jessie (our dog) right where she is the happiest...  If Dan or any of the kids leave the yard, she is always with them. 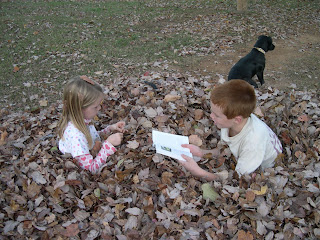 Actually, even in the yard, Jessie's always with them.  Here, Justin had raked up a bunch of leaves.  He and Leslie had fun jumping into them, and then he got a good book he'd been reading and read out loud to her until it was too dark to see.  Jessie sat close beside until they had gone indoors..... 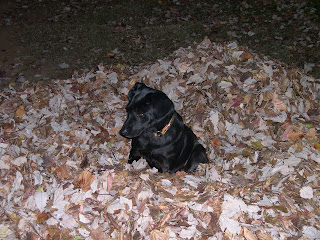 Then, SHE took a turn jumping in the leaf pile just to make sure she wasn't missing out on anything!!  It was hilarious.
Posted by Christy Jacobsen at 3:07 PM