We had originally thought that we would go to the Civil Affairs office for Gotcha Day in the morning, but we -- along with the Varnon family and about 8-10 other families -- were to go in the afternoon.  Miko was prompt, and we were the first ones there.  We had to check over some paperwork at first, making sure that all names, passport numbers, etc. were correct.  Before too long, caretakers from various orphanages in the province started arriving with the kids.  They took the children straight into a playroom, to make sure that all of the paperwork was out of the way before the families started to take their children!!  Then, one by one, they brought the children out.  We videoed the Varnon family as they got their sweet little boy!  Soon it was our turn. 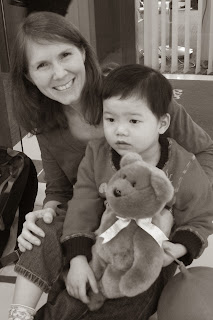 Out came Emily.  Miko captured the first minute or so on video for us, and then we had to move out of the way for another child to come.  We took Emily to the side and realized right away that she had had a diaper blow-out!!  :)  Quite the initiation back into babyhood for this mom!!  Even though Emily is not a baby (as in, "infant") we were soon to realize that in many ways, we really will get to start from scratch with her.  All of you who heard me say that we were targeting an older child because I was "done" with diapers get to laugh now!!!
One of the nannies from her orphanage came to the rescue with a bag of clothes and wipes -- and another diaper.  Since we'd been told by them that she was potty trained, I had not come with diapers in hand.  I learned my lesson.  We had a jumbo pack of diapers and wipes before we got back to the hotel room!!
After she was all clean, we went back out to the ruckus of the main room. And here was where Emily realized that things were swinging out of her control.  The nannies disappeared with Dan and Miko so that they could answer some questions that we had for them regarding her schedule and likes/dislikes.  We wanted to be armed with as much knowledge as possible so that we could do all we could to help her transition be a smooth one.
Well, I pulled a couple of toys out of the backpack and tried to get her interested in playing with me.  She took the toys, held them tightly, but didn't play.  She tried to run!!  I caught her and brought her back.  From that point on, she was inconsolable.  Even a strawberry sucker wouldn't do the trick.  She held it, but wouldn't put it in her mouth.  She cried and cried. Then screamed and screamed. Then screamed and kicked and wrestled.  She wasn't the only little one crying, but she was the most violent!!  Parents of kids who were holding it together a little better looked on with compassion in their eyes.  I told them quickly that we were OK!!  In fact, we were fine.  I had hoped for tears, and I got my tears!! :)
I was quickly exhausted, though.  Before too long, Dan came to help out.  We tried to distract her more, but she wasn't having it.  He took her when I couldn't hold her for another minute.  I took this
picture... 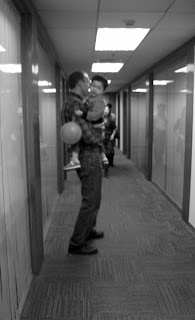 ...but it just doesn't do the situation justice.  I should have waited until at least her arms and legs were flailing so that it would show the true story!!  :)
Once before he came back, I was so tempted to beg someone to get my camera out of the backpack and take a picture of the two of us while she was throwing her tantrum.  Everyone was busy with their own little new ones, though, and besides that...they would have thought I was out of my mind!!  Who would want a picture of that for their scrapbook?!?!  Maybe only me!! :)
When we got back to the hotel, Dan had to go with Miko to a meeting room to prepare a bunch of paperwork for the next day.  It took about an hour.  Emily screamed the entire time.  She was pouring sweat, so I thought I would take off her sweatshirt as she had another layer underneath.  Well, to Emily, that obviously meant that she would NOT be going back outside, which is exactly what she wanted to do.  So, she threw a bigger fit yet.  She actually jumped up off the floor so that she could come down and stomp both feet at the same time!!  It might have been amusing in another situation!!
It had become clear that she was NOT crying out of missing the caretakers.  In fact, even they had admitted that she was not attached to any particular adult.  They said that she liked the other kids at
the orphanage, but it wasn't that she was sad to leave there.  It was simply that she was scared, and actually quite furious with the fact that she was out of control of the situation.  She thought that we might give in and get her back to what was familiar.
I did click this picture of her huddled beside the hotel room door: 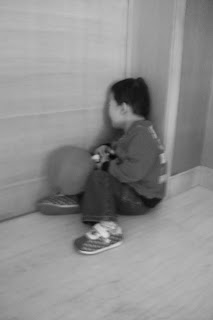 She later wedged her head into the corner here and turned her back to me.  I just sat with her beside the door and we waited there until Dan and Miko came back.
For the rest of the evening, she was either crying or very subdued.  She wasn't interested in playing anything, eating anything, or doing anything at all.  She finally fell asleep exhausted, and actually slept all night.  That wasn't quite the case for Dan and me since we were still on American days and nights...but we were just glad that she was quiet!!
Posted by Christy Jacobsen at 4:23 PM