Another day -- and every few hours seems to bring about a new change.  It's been good to see Emily continue to feel that she belongs with us.  Of course, I have NO idea what is actually going through her mind, but she still wants us close by, holding up her arms for us to carry her, and not wanting us to put her down, especially in strange places.  So, we're still a place of safety for her.

We knew that today would be another stressful one for Emily.  We have had to go into a crowded shopping center now two different times.... the first being on Gotcha Day when we were going for diapers and wipes, and then yesterday on the way back to the hotel after the Civil Affairs office.  Emily really is afraid in crowds, and while she wants to be held, she still isn't calm when we're holding her.  She is constantly alert and is scared, trying to climb higher and higher in our arms.  She has not once simply sat on our hip and seemed content to let us carry her.  She's like a cat in a tree with a dog on the ground barking at her!!  She climbs and hoists herself up and grabs at our necks and pulls around shifting her body this way and that.  It definitely isn't relaxing!

So, anyway, when we've been in crowds, she seems most afraid of people with white masks on.  In Asia, people often wear medical masks that look like surgical masks whenever they are sick or are trying to avoid getting sick.  In the crowded shopping centers, we saw several people with masks and Emily would start to cry.  We wondered if she’d had bad experiences with doctors.  At any rate, when we got up this morning knowing that today was the day for us to visit the international medical clinic for Emily’s physical required by the US immigration, we were bracing ourselves for traumatic.

At least she had (sort of) forewarned us!!

She whimpered and cried through the registration process with terror stricken eyes, and started ramping up the terror-stricken screams when we walked around to the examination rooms.

They let us hold her for everything except the blood draw – and we had no desire whatsoever to have to be the ones holding her down for that, because we didn’t want her to think that we were part of the “bad guys!!”

Emily had two “firsts” with us today.  One was actually in the lab where the nurse drew blood.  She told the nurse that it hurt!!  The reason that that was a “first” was that it was the first word she had spoken since we’d had her.  We weren’t in the room to hear it, and wouldn’t have recognized the Chinese anyway, but the nurses told Miko about it afterwards.  The orphanage caretakers had told Dan on Gotcha Day that she only spoke 3 or 4 words.  “Hurt” was not one of the words that they said she knew, so I think that there’s a lot more going on in her little brain than she let on!!

After we left the clinic, Miko and the van driver took us and the other adoptive family we were with to a Cantonese restaurant.  (Side note:  I've probably said this before, but we enjoy being along with the Varnons so much….  It’s good to be going through all these experiences together – They are great moral support, too!)  Miko and the driver ordered us some Peking duck and showed us how to eat it!!  They got us a lot of other really good dishes, too, and we thoroughly enjoyed it all.  We’re getting more and more adept with the chopsticks!! 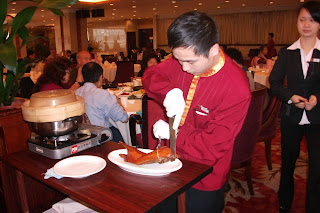 One of the waiters carving our duck!! 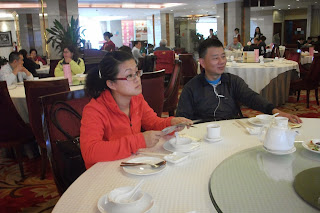 Miko and the driver (I wish I knew his name!!  He was a great driver, and was wonderful with the kids, too!!)
When Dan had had his conversation with the caretakers, he’d asked about the foods Emily was used to eating.  They basically named NO solid foods.  And, she had eaten very, very little since she had been with us… basically only some milk thickened slightly with some rice cereal, and some yogurt that you drink with a straw.  Well, Emily was sitting in Dan’s lap (she will never let us put her down outside of the hotel room), and Miko and the nice driver started coaching Emily on taking bites of noodles.  Miko finally got her to eat a bite of “real” food.  And, we all cheered!!  She actually went on to take a few bites from Dan, too!!  So, that was the second milestone we crossed with her.  I was so glad, as I was thinking that she was just too scared to eat, and this appears to be a step in the direction of relaxing a little bit more. 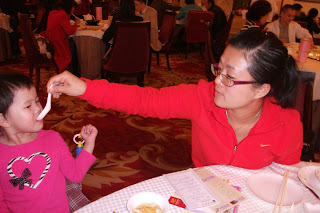 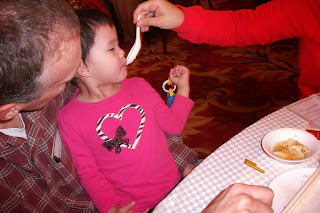 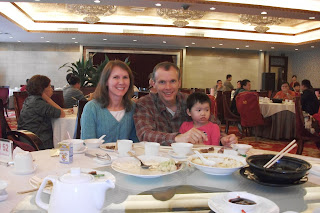 Posted by Christy Jacobsen at 10:59 PM