Today is the actual official day that Emily became a Jacobsen!!  There are many millions of orphans in the world, but there is one less today!!
Actually, there are quite a few less, and we are privileged to get to know other families that are in the process with us.  They are incredibly inspiring -- some with bigger families than us!!
All of us adopting this week from this province in China had to meet again at the civil affairs office to do some more paperwork.  Again, we were some of the first to show up, and again, it was a nightmare with Emily!!
However, she had slept through the night (Woo hoo!... Wish we could say the same!! :) ).  And, she had decided that we were her choice of people to be with.  She is dealing with a lot of fear, and yet she has decided that we are the safe ones!!  I can't tell you how happy that makes me.  She isn't "Mommy shopping" or "Daddy shopping" as many kids from orphanages tend to do.  She pretty much totally ignores everyone else.  She is afraid of strangers (which is likely what had her so upset yesterday when WE were the strangers!) and that is another huge thing to be grateful for!!  I don't know if she really understands that we are here to stay, but she she has accepted us for the here and now.  She wants us to carry her everywhere, and totally freaks out if we try to put her down.  Again -- no complaints at all, because we'd rather her cling than try to run off with every stranger that comes by. She doesn't even interact at all with Chinese people, which just shocks me to pieces.  But, I am glad.
As of right now, Emily will hold her arms out for one of us to pick her up before we leave the hotel room.  We've learned that whichever one of us it is, that is the person that will hold her for the next several hours.  She won't even transfer between Dan and me.  So, we have to plan our time well.  When we're in the room, she is slowly gaining confidence.  She won't play, but she will watch us play with things.  She doesn't attempt to imitate anything we do or say.  In fact, she is basically non-verbal.  The orphanage caretakers had told us that she will say a few words in Cantonese, and understands some Mandarin as well.  When Miko tries to interact with her, she attempts both languages so that maybe Emily will respond in one or the other.
Here are Dan and Emily waiting in part of the hotel lobby before we left for the civil affairs office.  Notice that she has toys in her hands.  She latched onto these toys here in the room, and hasn't let go.  She doesn't play with them, but she's not letting them go, either.  We've tried to get her to play with us, but if we try to take the toys to show her what to do with them, she cries...  So, hey -- let her hold them if they comfort her!!! 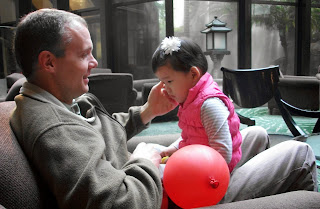 When we got to the office, though, nothing comforted her.  It was the two of us again with all the other families looking on with their compassionate and understanding eyes as our little girl was inconsolable.  We had to have our picture made for the form we had to turn in.  She screamed at the photographer, and he wanted to try to get her calm enough to take a decent picture.  We told him, No thanks -- we'd take the photo with her screaming if we could just get done and get out of there!!   She apparently had bad memories from yesterday!  Well, I was with her on that one!!  Ha Ha!  Another family gave us a small toy that made various sounds and had some little lights.  It has won my award for the best electronic toy for kids -- the sounds are quiet enough that they aren't obnoxious.  It's a pretend key chain with 3 plastic keys on it, and the electronic part is the buttons for keyless entry into your car.  It got her attention for awhile at the office and slowed the crying.  She latched onto it, and does seem to like pushing the buttons a lot.
Back at the hotel, she settled down again.  No smiles, but no screaming, either!!  She doesn't enjoy tickling, kisses, hugs, or any cuddling, but she does want to be close by us, and I consider that to be huge.
We went for a walk near the hotel.  The Garden Hotel is really a great place to be -- especially for Emily.  She doesn't like crowds or streets all that much, but the hotel is huge, and has lots of indoor and outdoor places to walk around without crowds. 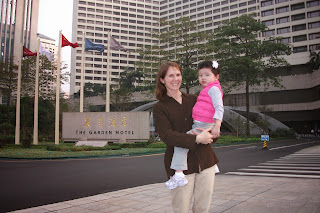 This is the front view. 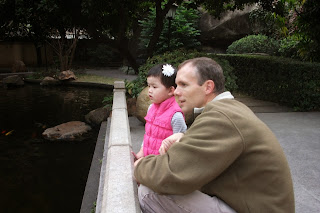 And this is out back in the gardens.  It is really beautiful!  Watching us feed the fish kept her attention for awhile.  She didn't want to hold the bread or throw any to the fish.  She would have to put down her toys/security for that, and there was slim chance of that happening!! 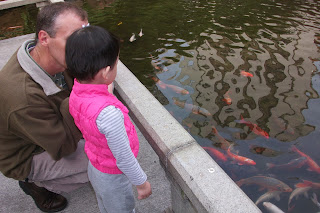 (Note from Anna: Mom is unable to access any blogs while she's in China -- due to an issue with the laptop -- so she's forwarding the posts and pictures to me via email, and I put them together here at home.  So far, the system has worked well, but there was a mix-up with the picture of dad and Emily in the lobby in the last post.  Mom intended for me to use a different picture in the Gotcha Day post, and the picture of dad and Emily in this post! :) I went ahead and posted the picture twice, but I'm going to go back and edit the last post asap! Sorry about that! :) )﻿

Posted by Christy Jacobsen at 11:39 AM