Day Five with Emily ---  We are getting into a little routine, and Emily really seems to do better with having anything be a little bit predictable!!  After last night, we are looking for anything that helps Emily to "do better."


Things work best when we wake up when Emily gets up and all take showers after that.  Way back on Monday night, Emily was too traumatized for a bath, and even to have her clothes taken off!  She screamed unbelievably so much when we simply took off her sweatshirt, that we put it back on and didn't try that again!  She slept in her clothes that night.  And, while we'd thought that she might consider a bath quite fun, we knew enough by Monday evening that it would definitely push her over the edge!

So, our routine became --- bath time in the morning!!  We brought along a couple of things that could double as tub toys, but I actually left behind the best ones accidentally.  However, another family came to our rescue....  their little boy was terrified of the tub toys that they'd brought, so they gave them to us.  Emily isn't too excited about them, either, but she tolerates a couple of them.  Dan and I have to do all the playing.  She pretty much just watches us squirt water with the toys.  We let bath time go as quickly as she seems to want it to go.  She is very subdued and is completely unsure of what's going on, but she's not too scared of the water, so hopefully she'll make good progress when she feels more secure.


After Emily is dressed again, and Dan and I have showered, we head down to eat breakfast in the hotel restaurant.  This, too, must have it's own routine.  Dan is often carrying Emily, but he puts her in my lap when we get to a table.  She gets too nervous if we're in the crowd getting food, so Dan "takes my order" and goes to get our food for us.  He gets Emily a banana and a container of yogurt.  She will eat her banana if I feed it to her while she is sitting in my lap, but when we tried to put her into a high chair/booster seat, she screamed.  So, my lap it is.  When we've tried to give her watermelon or any other fruit, she spits it right back out.  No pastries, no cereal (even Cheerio*s I brought from home!), no nothing else.  She will take some yogurt that you drink with a little straw.  She actually likes to drink things with straws -- she'll drink milk from little half-cup sized boxes like juice boxes, but we can forget about the sippy cup we brought along for her!


After breakfast today we went back to the room to Skype with the kids at home.  Today has been a laid back day for us... but not for Miko!!  The rest of the families with our agency are arriving from various provinces and gathering here in the Guang Dong province to do the last paperwork and necessary things for getting our children's visas.  It is nice to be able to have been in Guang Zhou already---  it seems that the fewer transitions we have to make with Emily, the better!!


We played in the room for awhile, and went for a walk around the hotel, then more time in the room, and finally went for lunch at a local Chinese place down the street.  Dan and I had been here alone Monday at noon before Emily joined us.  I think the waitresses recognized us and realized that we were in the adoption process!!  Dan and I have to take turns eating because Emily stays intent on spilling the food she can reach.  I eat with all the plates and cups on my side of the table out of her reach while Dan holds her.  Then we shove everything to his side while he stands up away from the table and we switch off with Emily.  He shovels in his food, pays the bill, and we leave.


Yesterday's nap went pretty well, so we decided to make that part of the routine as much as we're able.  As soon as we got Emily asleep, I jumped up and got out the computer to try to read emails and write a few responses.  She didn't really sleep long, but a nap is a nap, and since she seems to act out  worse when she's tired, any rest is better than none. 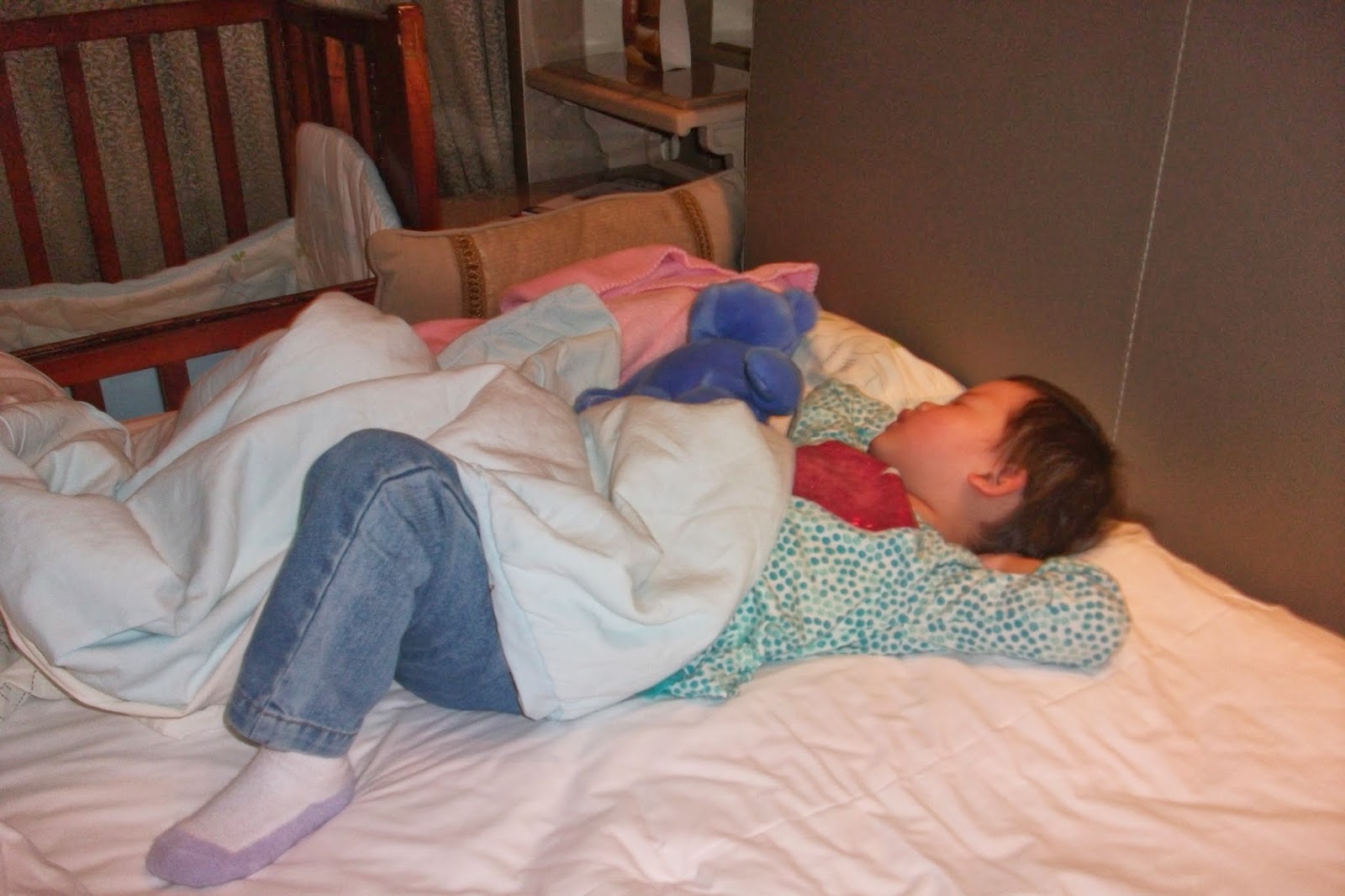 Later we went for more walks around the hotel.  There's a kid's play ground area that others had told us about, so we went to check that out.  Emily looked like she was excited about the slide, but when she went down, apparently it scared her, and she cried every time that we even looked at it thereafter.  So much for the playground!!  She's the happiest going up and down the escalators.  Good thing there is more than one in the hotel!!  We go up and down a LOT. 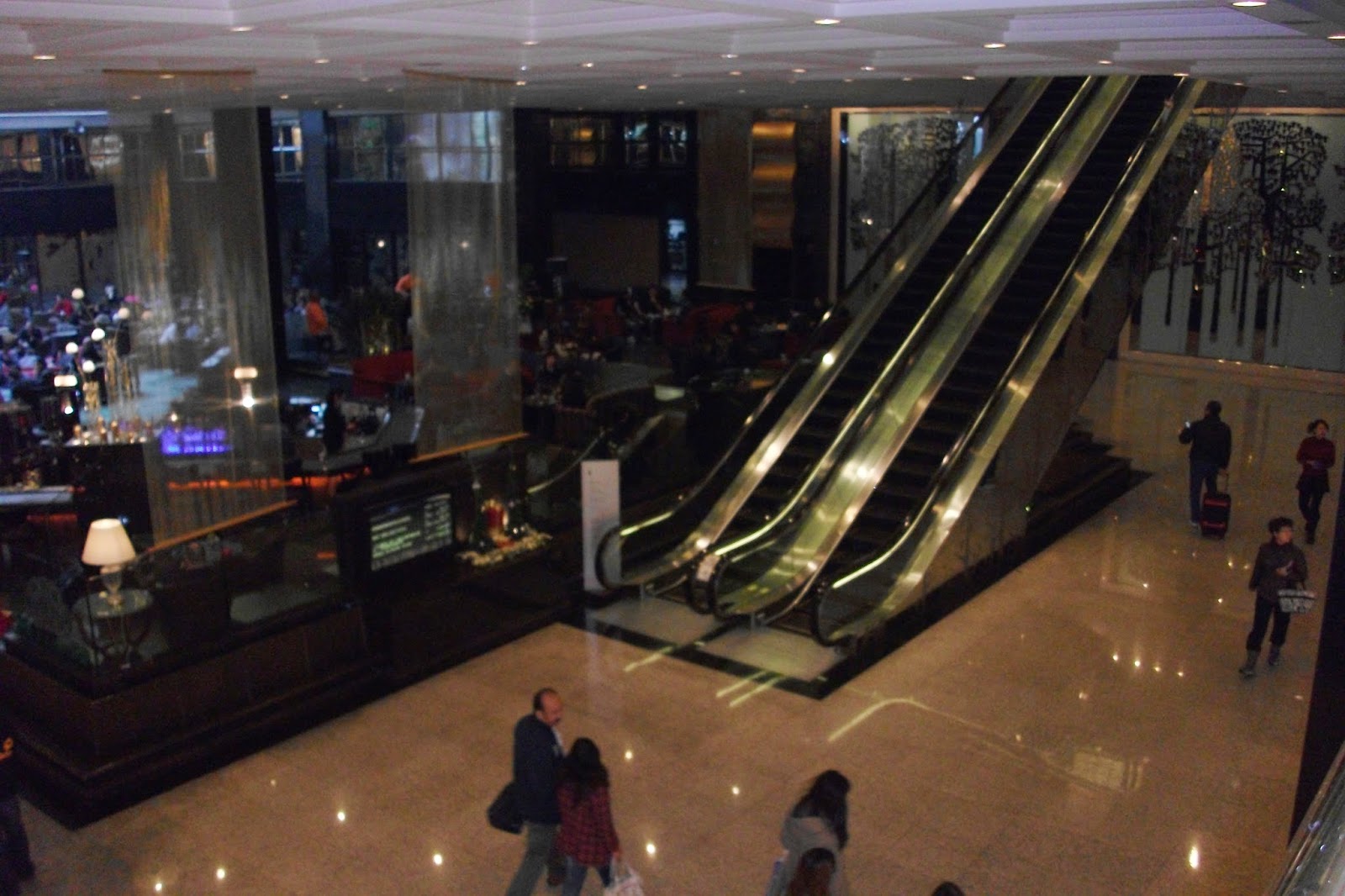 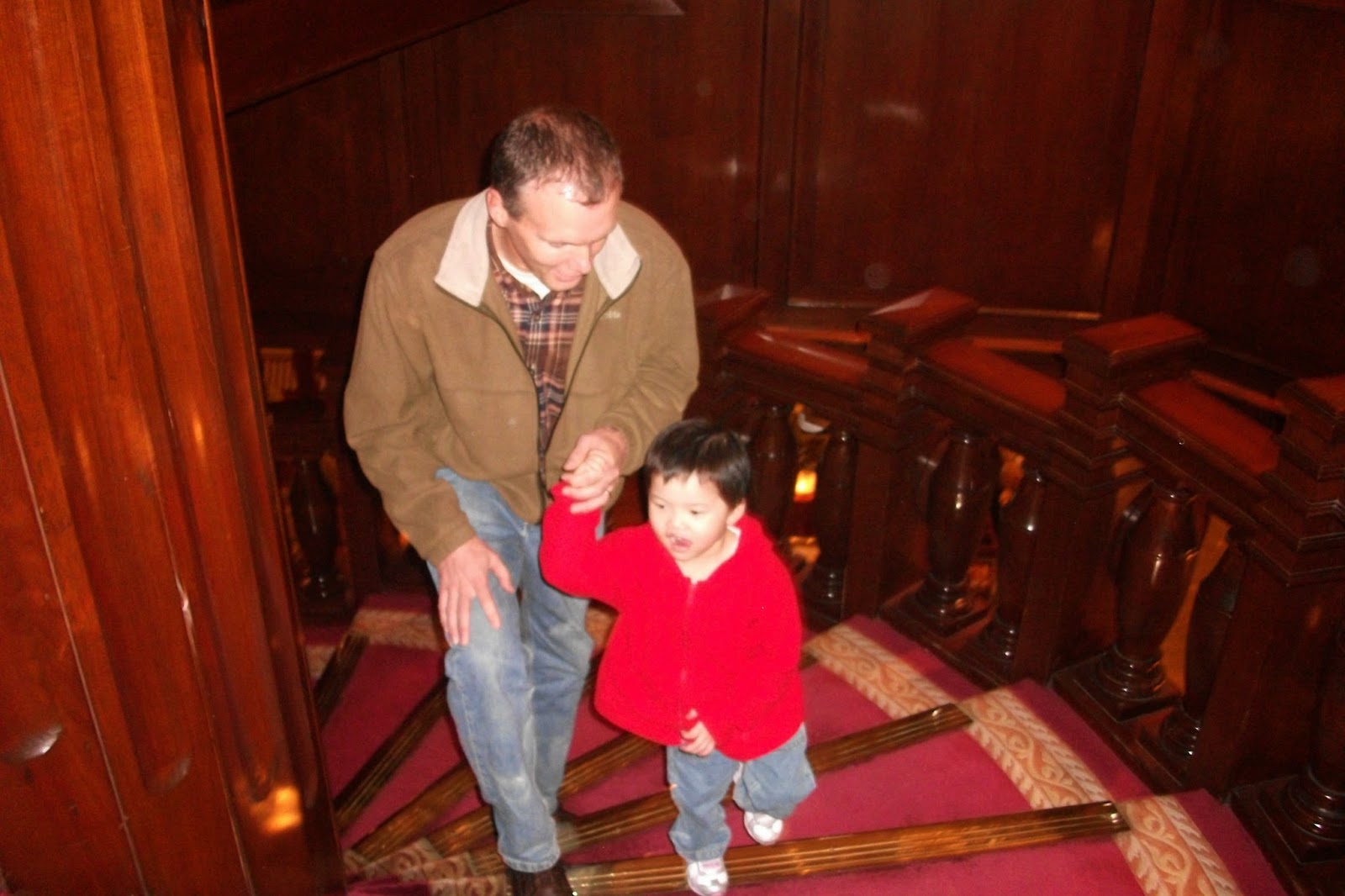 We have just about worn a path on our "walks" indoors.  We go outside, too, to the garden.  We had saved a piece of bread so that we'd have food to feed the fish.  Emily had never seemed interested in feeding the fish herself, but watches as we feed them.  Today she surprised us.  She took a piece of bread like she was going to throw it to the fish, and promptly shoved it into her own mouth and ate it!!  :)  How ironic!!  She'll hardly eat anything when we TRY to give it to her, but here we were trying to feed the fish stale bread, and she gobbled it!  Ha! 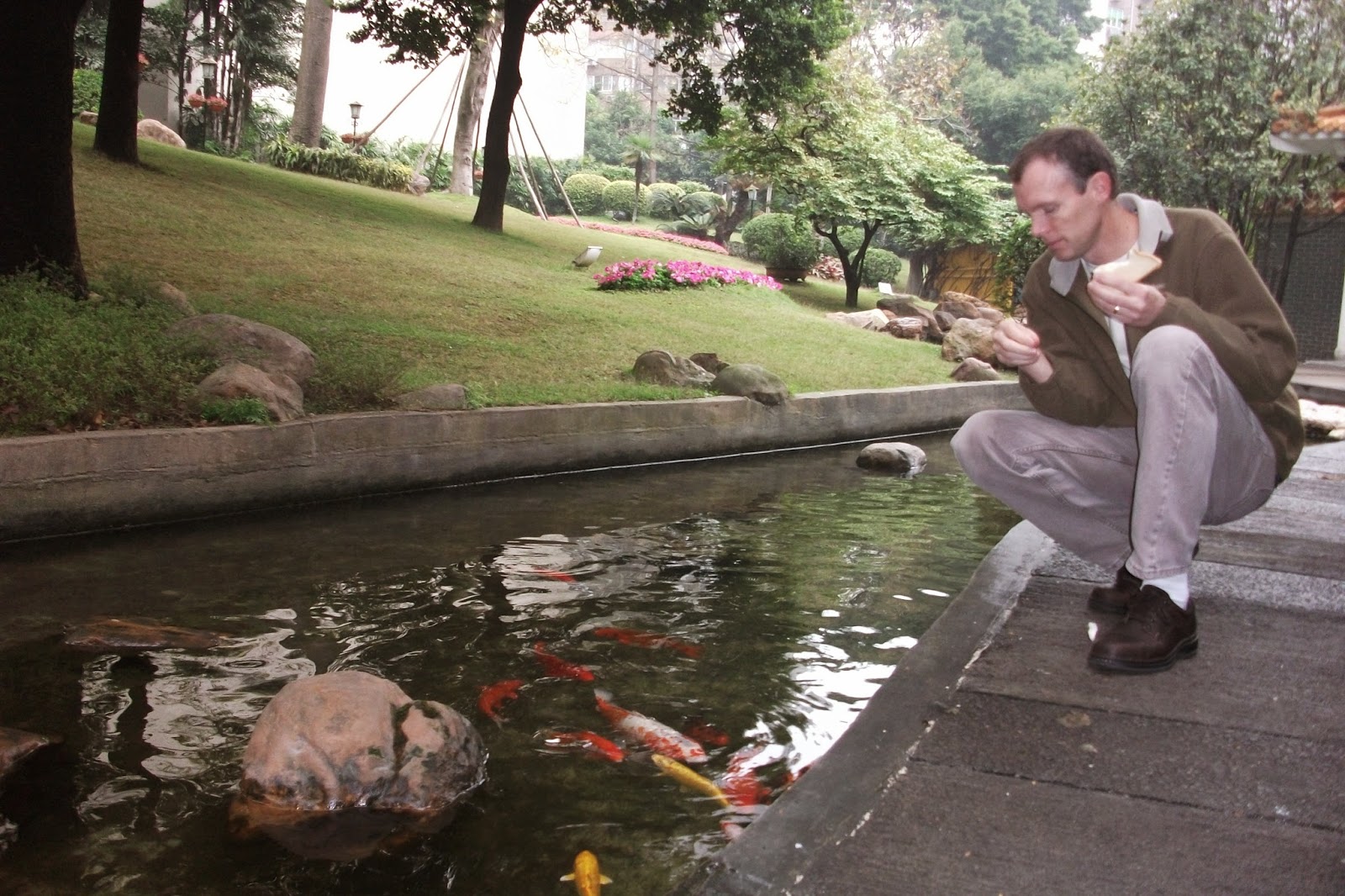 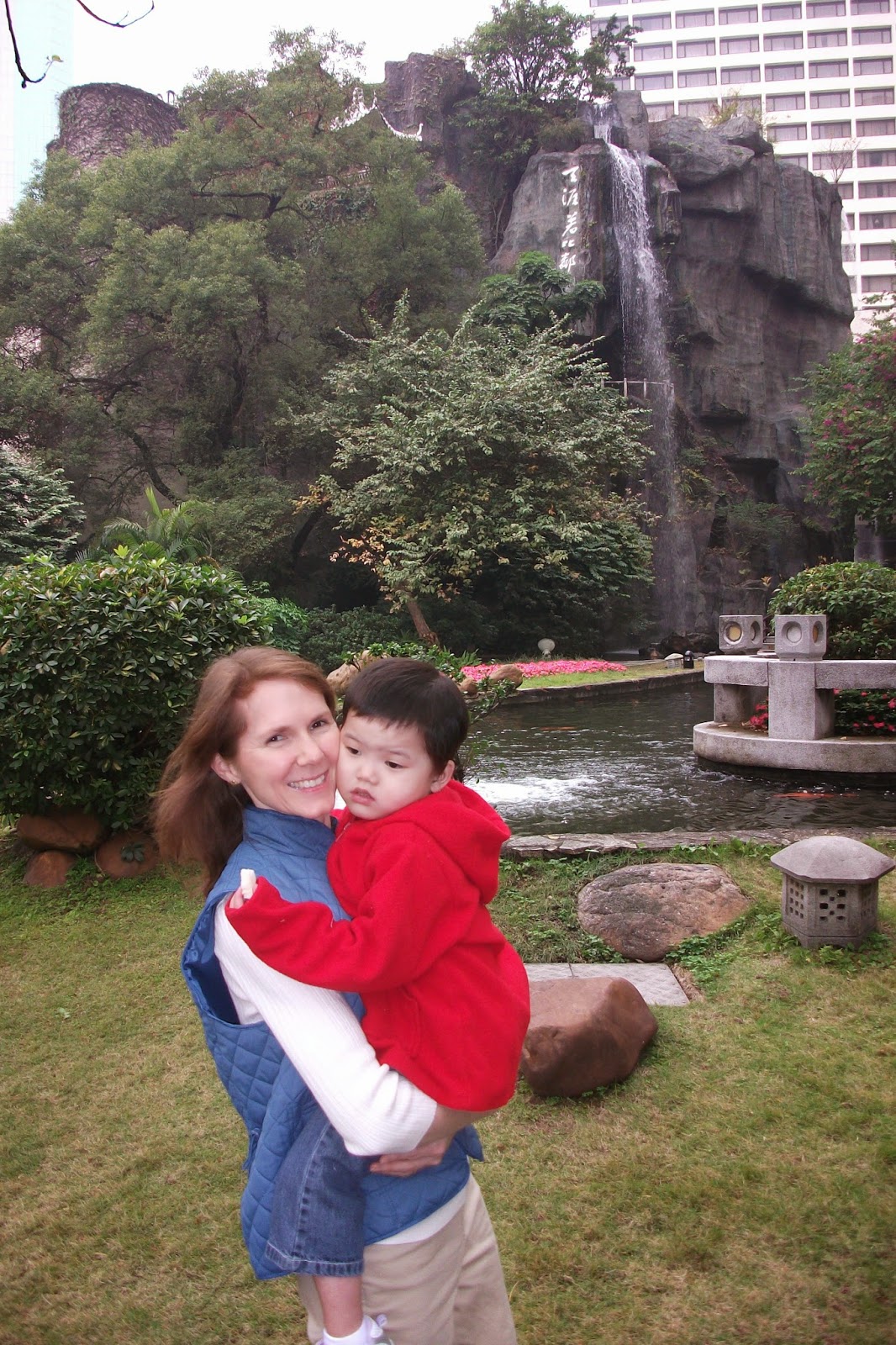 At supper time, we went to a different place close by-- a really good place that serves Malaysian food.  We've devised a new strategy for meal times.  I sitt down first and take all the breakable stuff off the table.  Then, Dan sits down, we get a menu, and order our food.  When it comes, before Emily can try to grab it and throw it off the table, Dan takes her for a walk.  Tonight he took her out into the mall/shopping center place where the restaurant was and rode the escalators.  I ate quickly and when he came back, I took my turn with Emily.  It's not ideal, but it mostly keeps her out of trouble.
Survival mode at its best!!!


Posted by Christy Jacobsen at 8:16 PM