Today was bound to be an emotional day --  It's been on the schedule as, "Visit the orphanage" day.  First, though, Miko had planned a little outing for sight seeing.  After breakfast, we and the Varnons boarded the van again with our friendly driver, and headed off to the Natural History Museum.  It's in the newer section of Guang Zhou, and we first walked around an area developed for the Asian games several years back. 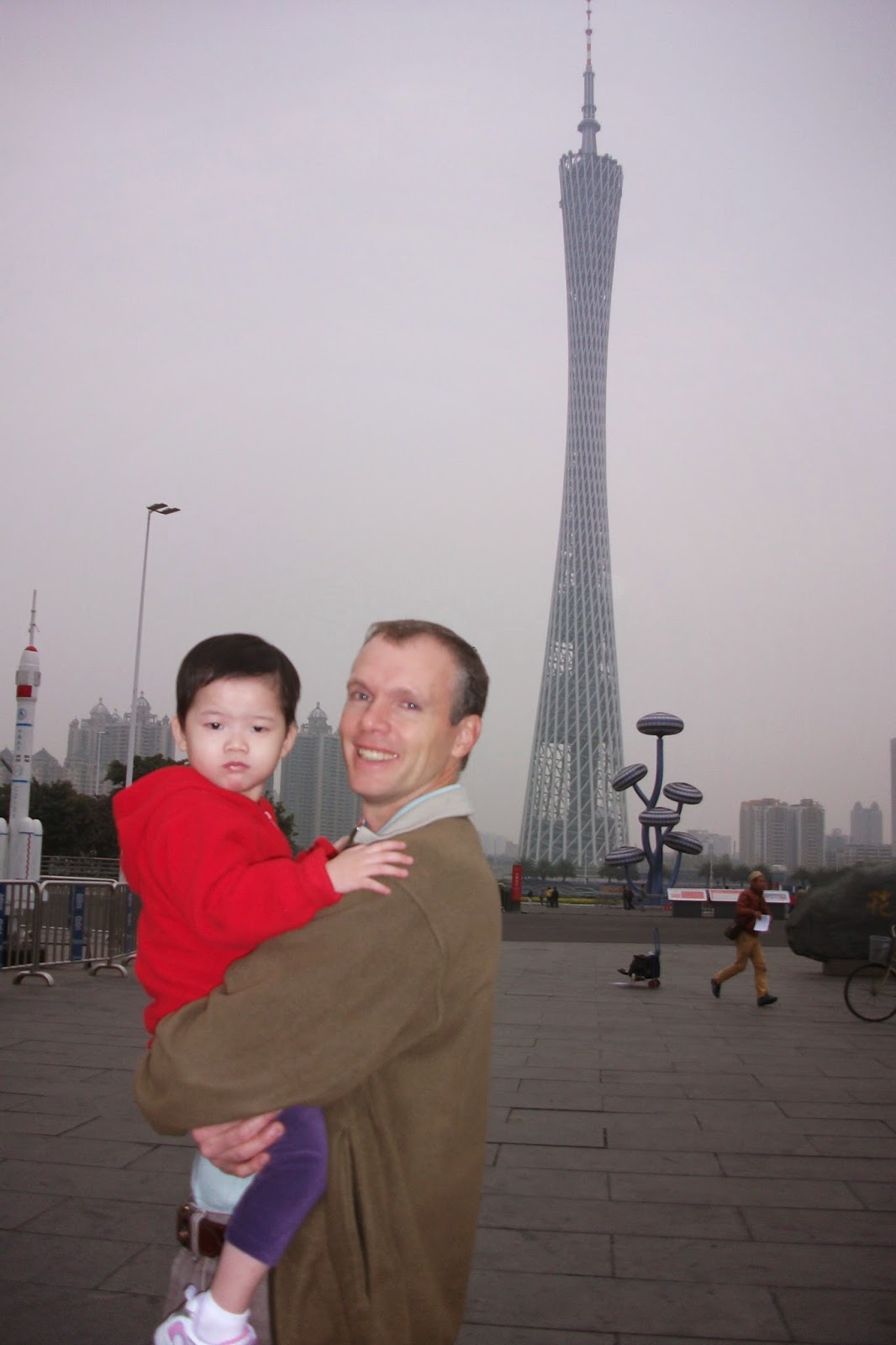 The building in the background here is one of the tallest buildings in the world. The museum was full of things that Emily's province is famous for.  It was really interesting.  One of the most interesting things happened with Emily's behavior, too.  You can tell from these pictures that Emily does not look happy at all.  That is so very true.  We've never seen a true smile, I don't think, and she was still clinging tight as velcro today.  We continue to be so glad that she doesn't run to every stranger, though.  We'd rather have her cling to us than run off to every person in a crowd.  She is still VERY intimidated in crowds.  However,  in the museum we met up with one crowd that she did try to join up with.  There was a group of Korean kindergarteners that were having a field trip.  Maybe they reminded Emily of her group in the orphanage.  But, at any rate, she definitely would have left us to go with them!  That actually supported what the orphanage care takers had told us--- that she wasn't attached to any adults, but liked playing with children her age.

We went back to the hotel for a lunch in the room, and a quick nap before we had to head to the orphanage.  It's so nice that it's close by, and we can make the trip easily.  While I knew that it would be difficult, I did very much want to see the place where she'd spent her first 3 years.

We had no idea what to expect from Emily.  She could have screamed the entire time, or been so glad to see familiar faces that she left us and wouldn't want to leave with us again.  Dan and I made our "game plan" on the way.  We decided that he would carry her, and I'd take the camera and the gifts for the orphanage that we'd bought earlier.  If she got upset by being there, he would just take her quickly back to the van, and I would take as many pictures as possible as quickly as possible.... and then we'd just leave.  Before we went in, Miko told her that we were going in to see her friends, that she would say good-bye to them, and then we would all leave again together.  I couldn't tell how much -- if any -- that Emily understood of that.

When we got inside, she did, in fact, start to cry.  We were ready to make our escape when one of the caretakers got her to calm down.  I wish that I knew what was going on inside her head.  They distracted her by asking if she wanted to show us where she slept.  She ran to the kids' room where her group slept, and I was clicking pictures.  Once we got in there, though, she really started screaming.  I wonder if she thought we were going to make her take a nap.  She thoroughly despises naptime and bedtime. 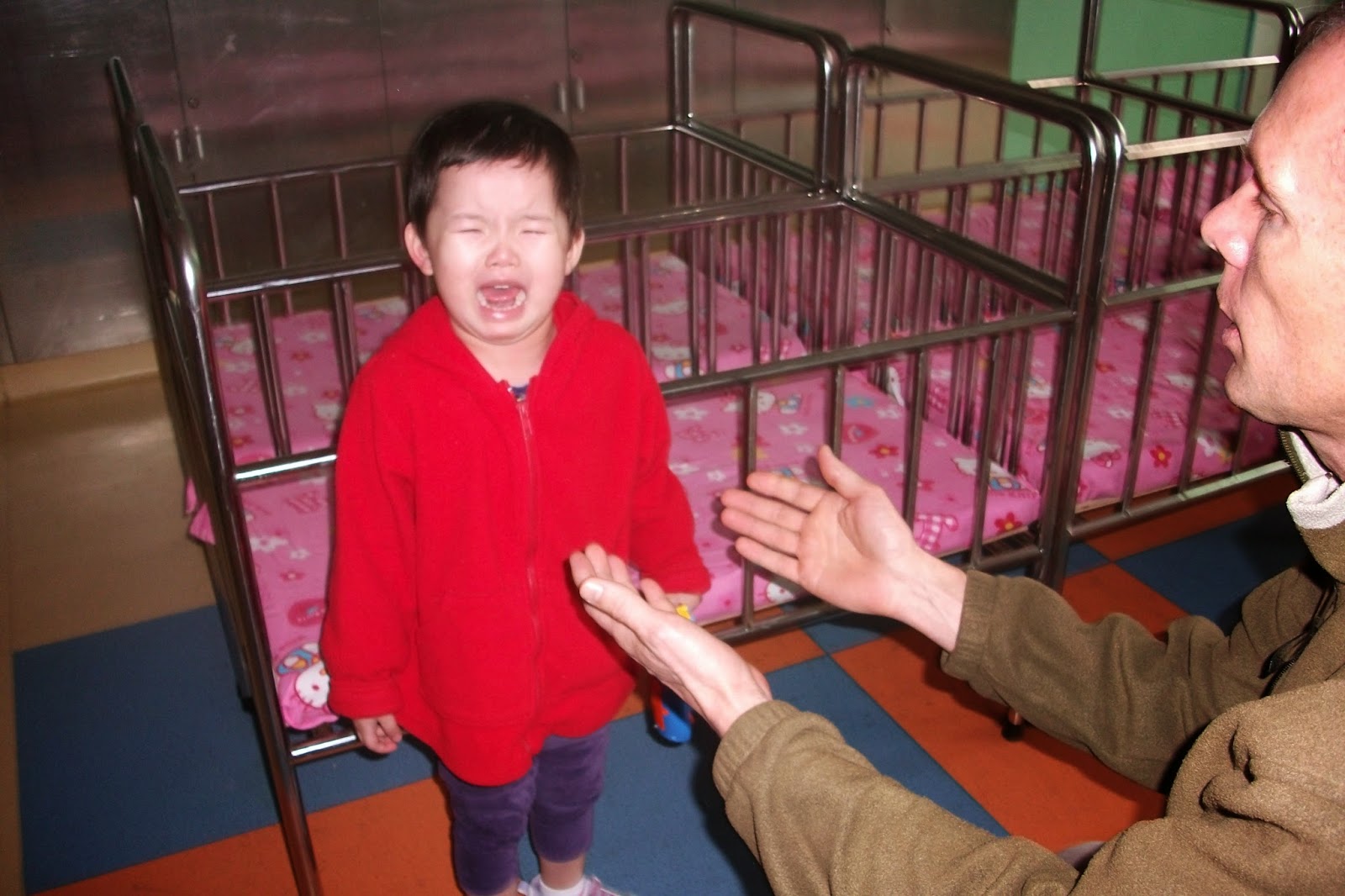 I think it's OK that I post this shot.  I took lots.  At first they said that I could take pictures of the rooms, but not the children.... but then they didn't mind a few shots of the kids in her group, too.  I won't post those, though, as I know that's not allowed.

We went back into the room where her group was standing together, and took some pictures of us with them, and us with the staff.  We got to interact with the kids for a little while.  It completely broke my heart. We really didn't want to stay too long, though.  Once Emily got comfortable with her friends, she wasn't too sure about us anymore.  She had her two "security" toys in her hands and all the kids gathered around to see what she had.  Other than those 2, we didn't see another toy in the entire place.  The strangest thing happened that I still don't know how to interpret.  The kids all plopped down around Emily in a tight little circle and looked at her toys.  But, not ONE of them reached out to grab them, take them away--- or even touch them.  WHY?  It totally blew me away.  Is she a dominant kid and the others "knew their place?"  Are they not used to playing with anything and weren't even sure what to do with the toys?  I certainly can't imagine that they've been taught to wait their turn -- And, Emily wasn't into sharing.  You would think that if they don't have many toys, - that whatever  they saw would make them want to grab it and cling to it like Emily was.  She sort of held the toys, pushed the buttons on the one electronic toy, and they sat there and watched her without a sound, without pushing, grabbing, or really even talking.  So strange.

We went outside to take a couple more pictures of the compound with the director.  One of the caretakers was holding Emily, and Miko told her that it was time to leave.  I was very worried that she would pitch a fit to stay.... and that would just break my heart (of course I know that it would be perfectly natural since this IS the only familiar place she has.... and familiar is nice and comfortable.)

However, Dan and I got in the van, I held out my hands, and she came to me---  very solemn, but then she is almost always very solemn.

From there, we went to the hospital where Emily was abandoned by a mother who felt she couldn't care for her daughter.  One day Emily will have questions about her past, and while we won't ever know all the answers to her birth story, we'll have some pictures and she can see places and faces of her first days and years.

She went to sleep on the way back to the hotel...... and I cried on the way back to the hotel.  I was overwhelmed with the whole day.... with the plight of those sweet little children.  The orphanage was very clean....  but what struck me the most was that it was just an existence.  And, that had things been just a very little bit different, (if we had not gotten her file but rather a different one, if we had felt that we couldn't handle her needs, or if she had not been on the registry) --   Emily would have been existing in that place today, too, with no knowledge of any place else.  I was overwhelmed with my care for her in just these few short days of being with her.....  but overwhelmed with the thought that NO one was caring for those others in her group.

On the top of a blog that I frequently visit is a quote, "How do you return from China and go back to your normal everyday life?  The answer might be that you just never do."  The family whose mom is the author of the blog has returned to China several times, and also to Bulgaria (I "met" her in an adoption group online during Jonathan's adoption).  They now have one biological daughter, 3 Chinese daughters, and 2 Bulgarian sons.  You can't miss being impacted by looking into the eyes of those children who remain.  The first part of Proverbs 24:12 says, "Don’t excuse yourself by saying, “Look, we didn’t know.”   Once you are there, you know.

Posted by Christy Jacobsen at 7:14 PM