Wednesday-- being a tourist

Since we are just waiting for Bethany's passport to process now here in
Kunming, our guide planned for us to do some sightseeing.  If I understood
him correctly, the lake we visited is the largest fresh water lake in
China.  However, that might not be right.  At any rate, it's the biggest
attraction for the seagulls flying south for the winter!  The little lake
in the park across the street has lots of seagulls, but this lake has many
more.  The lake front is built up really nicely, and there were people
selling bread and nuggets of food for the birds that looked similar to dry
puppy food.  The only negative thing was you had to be very careful not to
get "bird bombed!!"  The weather was cool, but not too cold.  The wind was
really blowing in across the lake, though, and made it chilly on the board
walk. 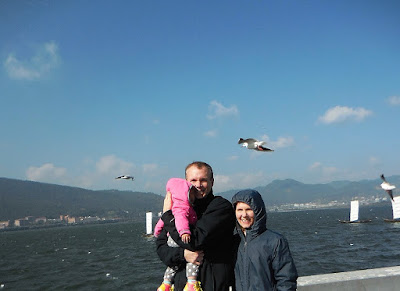 After we'd fed the birds plenty, we decided to go get some food for
ourselves.  We headed to a really nice Chinese restaurant and had lunch.
Up until this meal, we really had not seen Bethany eat very much.  We knew
that she MUST like to eat just by the looks of her cheeks and chub, but we
just hadn't found anything that she inhaled!!  We HAD determined that she
had never had much of anything cold or even cool.  If I don't get her
formula warm enough, she just sort of chews on the bottle.  She wouldn't
take the apple juice I'd tried to give her, and she made a surprised look
when I gave her some yogurt, even though after the initial cringes, she
did eat some and seemed to like it.  Well, David ordered some steamed egg,
and she gulped it down!!  It's about like a breakfast egg casserole, but
it's softer.  She obviously approved of that choice, and when I held her
up to change positions, she started to cry because she thought we were
leaving and weren't going to let her finish her food!!  :)
After lunch she took a good nap, then we met David for checking over all
the documents for accuracy before we take them to Guang Zhou to the
meeting with the U.S. consulate.  The other Lifeline family was there,
too, and when we were all done, we decided to have supper together at a
restaurant next to the hotel called Bluebirds.  I'd been told by another
family that had adopted from Kunming that it was a good place to eat, so
Dan and I had eaten there last night and wanted to go back.  Bethany was
fussy, and we had to eat in shifts, which is basically what we do all the
time except at breakfast in the hotel where they have a good baby high
chair for her.  We knew that a bath would make her happy, so we ate
quickly and headed for the room and bath time.  We definitely have that
routine down pat now....  a long warm bath, warm footie pajamas, a nice
warm bottle, and Bethany falls asleep and stays asleep all night.  You
can't ask for better than that!

Posted by Christy Jacobsen at 11:18 PM