I woke up this morning with the oddest feeling.  Here it is-- THE day.  Of course, I also felt odd because my sleep is quite odd!  :)  I go to sleep fine, then wake up for several hours, then go back to sleep and sleep till the alarm.  BUT, at least I'm sleeping.  Dan did better than I did last night .... so we switched, because I'd been doing more sleeping than he had beforehand.
We ate breakfast in Toni's room because this hotel doesn't serve meals.  We had cereal and toast and were off-- first to change money (this was the first time the banks were open since we arrived on Sat. evening) then on to the orphanage.
Again, a very strange feeling when we drove up.  Stranger when we got out of the van, and even moreso when we walked in.  The orphanage director is very nice, though, and I soon calmed down.  She had people that had just arrived (maybe inspectors?) so she didn't spend long with us.  I asked a few questions and then they sent Teodor down to us.  We found out that we were actually in his room.  That was different, because when Shelley had been here before, he'd been in a room upstairs with other boys.  Now he's staying on the first floor in his own room.  Very unusual, and the first time I get a chance, I'll ask.  We never got to talk to the director again as she was with the other people.  We later heard that one was a mayor.  Maybe they were just making a political visit!
So, anyway, he came in and was very nervous.  He shook our hands, told us his name, and asked us ours.  He is very sweet and polite!!  He got over his nerves later and we all played and had fun.  It was too cold to go outside.  Actually, it was very windy.  I think we could have handled the temperature, but the wind was rough, and they didn't want him to go outside. 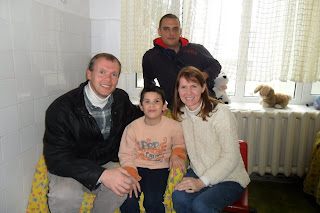 We're about to go back to the orphanage for our visit this afternoon, so I won't get into lots of details till later.  I'll try putting on some more pictures.  I'm having a hard time with my pictures.  Very frustrating, because I'd like to share more, but for some reason -- all but one time -- it will only let me put on one per post.
Posted by Christy Jacobsen at 7:40 AM