Where do I even start???  Today was just amazing.  This little guy is going to be a Daddy’s boy.  Right now I’m just the strange woman who would like to hug him a lot…. And he’s not really into hugs!  He tolerates me!  J  He did absolutely LOVE the video that we made of our kids at home.  We had it on our laptop and took it with us today.  And, I was the video and camera person…  so that made me pretty cool for a little while!  Ha!
One thing that we noticed for sure today is that he really does need glasses.  We asked the director about it, but she said that it wouldn’t be good, because the other kids in his orphanage would take them off of him and break them.  Teodor is the highest functioning kid there…. And many are larger, but working with intellect around that of an 18 month old.  What’s the first thing little kids reach for when someone with glasses is holding them?  Definitely the glasses.  So, these kids can walk and get around, and being bigger than Teodor, they wouldn’t let glasses stay on him for a second.
We started out the day playing ball a little bit.  Then, Dan reached into the backpack and brought out the lego firetruck set.  Teodor’s eyes LIT up!!  He was SO excited.  I continue to be amazed at his hand-eye coordination.  This is one place where we were seeing his need for glasses, but even still, he was doing an excellent job of putting the legos (these were little legos, too) together.  He’d always try very hard, and only if he really couldn’t get it, would he ask for help.  I liked his determination.  But, he wasn’t really stubborn about it.  He kept looking at the picture on the box, and wanting to copy it, but you really have to go in a particular order, so he would listen to directions.  He was SO very proud when it was all done.  He turned around to Toni to show it to her, and whispered, “I would really like to keep it.”  When we told him he could, he was VERY happy!  Later the orphanage director came in (he calls her “boss”…. SO funny!) and he couldn’t wait to get it to show it to her.  He always puts everything neatly away when we’re finished with it (… maybe he’ll teach the rest of my kids!  Ha).  So, he ran to his little cabinet and got it out.  Then, he put it back away when she was finished bragging on him.  I thought that he’d just want to keep it safe in the cabinet and just take it out to look at it.  But, first thing this afternoon when we were back for our afternoon visit, he took it out and asked if he and Dan could take it apart and do it all over again!  Of course the answer to that was yes!!  So, legos really took up a lot of the day.  But, he’ll certainly fit in around our house as that’s the main activity going on in the living room most days! 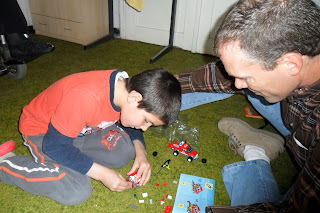 Concentrating hard on the Legos 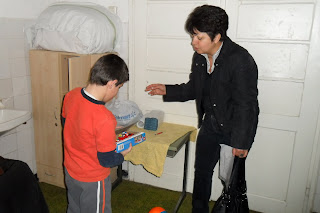 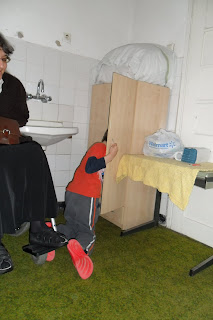 Hiding it away again in his cabinet 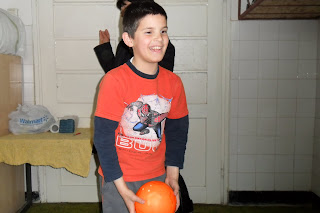 Can you tell how much he enjoys playing ball with Dan?
Posted by Christy Jacobsen at 2:09 PM