We've arrived and have really enjoyed the trip so far!  Thanks to everyone who prayed for Leslie and our saying good-bye....  there was certainly divine intervention!  She actually smiled, gave me 3 kisses and waved good-bye!  WOW -- this is the girl that often cries when I go to the library!!
Our flights went well, and while I didn't keep looking around for the kids like I usually do in airports, I DID have a hard time thinking at every minute that we'd left a carry-on behind.  Dan and I had one carry on and the computer case, and we ususally (traveling with the kids) have multiple back-packs, 7 jackets, one or 2 pull carry-ons, etc.  So, everytime we got up to go walk around the airport or get off a plane, I'd ask Dan, "Is this really everything??"
So, we got into Sofia and Toni and her brother (our driver), Marty, were waiting for us.  They brought us to the Hotel Budapest (yes, we are in Bulgaria..... the Budapest is just the name of the hotel!).  We got checked in and then went for a walk downtown.  A lot of places had already closed because it was later in the evening, but not yet dark.  We managed not to get lost.  However, Toni had given us a cell phone with her number keyed in (as she does for all families) so that if we needed any help, we could get in touch with her.  She actually called us while we were out, and we decided to leave a little bit earlier than originally planned tomorrow for the drive to the area where Teodor lives.
We came back to the hotel, had dinner in the restaurant here (passed up 2 McDonald's while out and about!) which was VERY good, and then --with the help of the desk clerk in the lobby, figured out how to get online.  I didn't post right away because I knew I'd be up in the middle of the night with jet lag (which I am....  it's 2 am now! ) and I thought I'd give myself something to do later!  Ha~!  At least Dan is sleeping...  I had slept much more on the plane than he did.
I'll see if I can get a few pictures put on before I try to go back to sleep! 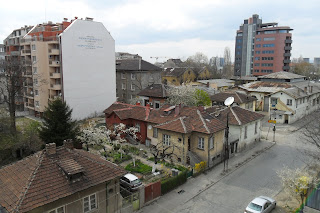 Here's the view from our hotel room window.

OK -- well, there's one for you to see!  I'm now having trouble getting more to upload.  There're more on the computer... they just don't want to go to the blog.  It may have something to do with the fact that it's 2:15 and I'm sitting in the dark so that I don't wake up Dan!  Ha!  I'll head back to bed, and work on it again in the morning!


Posted by Christy Jacobsen at 6:58 PM