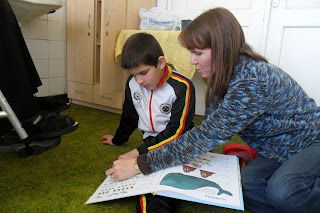 I had to take a nap this afternoon, as I guess I’d been running on adrenalin all week, anyway, and it finally gave out!!  I had been sleeping OK, but last night I really didn’t sleep all that much.
We went back to the orphanage about 4 o’clock and played some more.  Dan and I decided that he’d do more of taking pictures today and let me play more.  We all played Uno again, though—even Marti!  We are enjoying Toni and Marti SO much!!
After we played, Teodor was ready to take the Lego fire truck apart and put it back together.  So, I was the Lego person today.  I did OK, but Dan had to bail us out a couple of times!  Ha!  Then, we brought out a book --  Richard Scarry’s Big Word Book (or something like that).  I’d shown it to the English teacher this morning, and told her I’d leave it with the orphanage director for them to use.  It has great vocabulary in it – with Kenny Bear waking up, washing his face, brushing his teeth, etc.  There are pages with everything you can think of (at the airport – he liked that one!  Body parts, even fire trucks!)  The last page is numbers, and his love for math came out again.  He and I counted all of the objects—I in English and he in Bulgarian.
We played ball a little bit, and Teodor wanted Marti and Toni to shoot as well.  Dan is a good basketball goal!!  J  His friend had come back in, and Teodor wanted him to shoot, too.  I was really glad to see him wanting to share.  He’s really responded well to everything--  he easily transitions between activities, hasn’t pitched a fit or even acted ugly at all when we decide to do something he doesn’t want to do (like take his measurements.)  He doesn’t always like it, but he has self control.  It seems like his major delays are social things… but I think he’ll learn.  Toni was “instructing” him on how to hug me when we got ready to go…. And he really did give me a very hard squeeze as opposed to just standing somewhat lifeless when I’ve hugged him before!!  And, he even went with his friend to the front door to wave at us when we were in the van leaving.  We go out the back, and walk around, and he sometimes walk to the door with him, but has never gone to a window to watch us go.  The other boy, on the other hand, has gone to each window around the orphanage “following” us as we go around, and then stands at the door waving till we leave.  So, I guess Teodor caught on today!
Just as a side note, the director said that his friend’s file is with the MOJ --  He needs a family, too!!  So, everyone out there needs to be praying!!!  It was Kullin’s adoption (Shelley’s visits) that brought us to Teodor, and we’ll very gladly pass on the favor for a family for this other boy!!
Posted by Christy Jacobsen at 2:07 PM