When I got into bed (my own bed!) last night, I quickly counted how many hours we'd been up and going.  Yikes - it was 28 hours.  I think I slept maybe 2 hours added together from short naps here and there on the long flight, and about an hour more on the last flight.  Dan and I quickly found that we could not risk falling asleep at the same time during traveling because Teddy was too quick to get into trouble.  Once while I was napping, Dan closed his eyes for just awhile, and when he opened them again, Teddy was out of his seatbelt and headed who-knows-where.  Honestly the first thing he probably would have done would have been to try to open the emergency exit door at the back of the plane.  Somehow he seems drawn to things like that!  Unfortunately, he did not sleep but 30 minutes of the entire trip.  So, we were completely exhausted from being on "high alert" for so long while thoroughly brain dead.  He did LOVE the push button pad on the arm of the seat.  I am not exaggerating one little bit when I say that he pushed those buttons more than 1000 times.  The music channels went from 1 to 30, and we practiced counting a lot!  Ha!  I thought when the food came that he might be interested enough in the food that he would temporarily forget the buttons, but NO -- then it was 2 bites and push the buttons several times.... then 2 more bites and push the buttons more.  At the first of the trip, we told him that he could NOT push the one to call the attendant, because he most certainly would have called her over and over and over.  The waiters at restaurants in Sofia of course all understood him and talked with him, so he was very sure that the airline attendants all should understand him, too.  He never gave up trying when one walked by!  But -- back to the buttons -- we'd let him push the others, but then he started blasting his eardrums out with the volume.  When I told him to leave those alone, he kept trying to do it when I wasn't looking, so we had to make the volume buttons off limits, too.  By the end of the trip, the whole thing was off limits because we just couldn't take it anymore!!  The biggest praise of the entire trip was that we were blessed to be seated at the front of a section so that we didn't have anyone in a row ahead of us on the long flight (which was around 9 hours, I think).  On the first leg of the journey (Sofia to Munich), it was all we could do to keep him from putting the tray (which is fastened to the seat in front of you) up and down a million times and pulling on the seat to the point that the lady sitting there wasn't ready to strangle us!!  We did give him freedom with the window shutter which slides up and down, and it's just a wonder that it still worked when we disembarked!!  :)   Another thing about those seats in airplanes that cross the ocean is that the TV is on an "arm" that folds up under the seat.  In all of the other rows, it is on the back of the seat in front of you.  So, ours were sort of "hidden," and we were able to bring it out when we had gotten to the desperation point!  Hurray for cartoons!!  The short domestic flights don't have those TVs, so Teddy was quite disappointed when we got on our last flight home.  The first thing he asked was, "Where's the TV???"  He wasn't going to let us pull one over on him this time!  Ha!  Everything is just SO new to him right now... there is absolutely no quenching his curiosity. 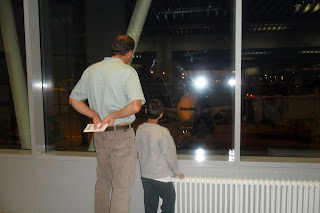 Early Saturday morning looking at the plane that would take us from Sofia to Munich. 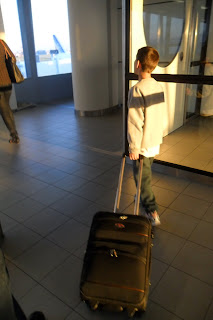 Last few steps on Bulgarian soil.  He loved pulling the carry-on..... mostly because the handle had a button you pressed to make it go up and down!!  :)  --Can't even begin to tell you how many times it went up and down during our journey! 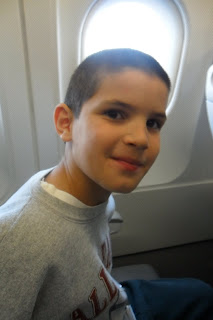 On the first flight!  He was VERY excited to be finally riding in an airplane. 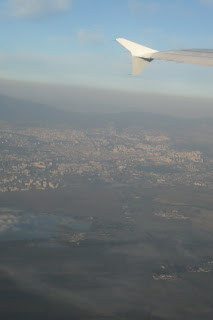 Our last view of Sofia that I managed to catch in between times of Teddy raising and lowering the window shade! 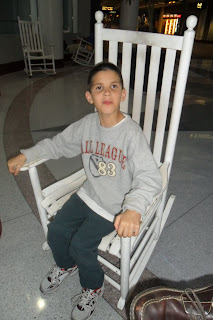 During our long layover in Charlotte --- He wasn't too sure of a chair that rocked!!
We had a welcoming party at the airport, and I hope that my mom and sister were taking pictures because I could hardly focus my own eyes, much less try to get a camera to focus!!  Ha!  I'll try to get their pictures off their cameras and post some later.
Teddy was so glad to see the kids (Dan and I were, too, of course!).  As we landed at each of the first 2 airports, Teddy had asked if the kids would be there.  When we finally got to the Montgomery airport, he was very excited that this was the ONE!
We got our luggage and finally headed home.  Teddy had not been air sick at all, and since the drive home is only an hour and not terribly curvy, I had hoped that he wouldn't get car sick.  Oh well -- 15 minutes from home, he lost his supper.  I had just  asked him how he was feeling and tried to give him a bag, and he wouldn't take it.  Within 2 minutes.... yuck.  We got him home, stripped him down in the garage, and headed him straight for the shower.  I was washing out his clothes in the laundry room and wasn't anywhere around when Dan was putting the kids to bed, so I missed getting a picture of his first night in the bunk bed with Justin.  Sarah slept on the floor of their room on a mattress so that she could wake up if he got during in the night.  (Praise the Lord for older kids who help out mom and dad when we're too tired to think straight!!)  We didn't want him to get up and wander and end up falling down the stairs!  She said he sat up once during the night, but when she talked to him, he lay back down and went back to sleep.  Hopefully he will sleep as well tonight!!
Today Dan, Teddy and I stayed home from church.  We had all been up in time to go, but Dan and I were too brain dead, and Teddy would probably have been too over-stimulated!  He's played really well with the kids this afternoon, he loves the swing, likes Jessie (our dog) a lot, and has done pretty well with staying out of things that he shouldn't play with. 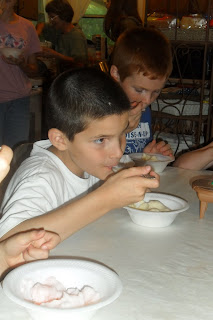 His first home-made ice cream!  Tomorrow is my dad's birthday, and we celebrated today!  Teddy liked it a lot! 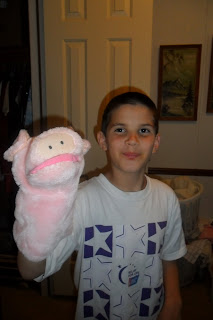 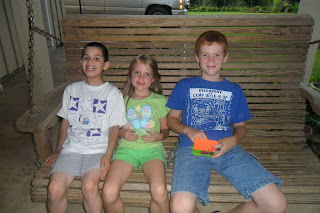 Our 3 youngest having fun on the back porch! 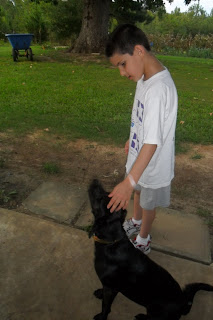 Jessie is very patient with him.  I wasn't outside when he first started playing with her, but Dan said that Teddy pinched her nose, played with her feet, and pulled her toe-nails!  Again-- everything is so new and interesting!
We've decided that the best way to describe him right now is a 2 and 1/2  to 3 year old kid in a seven year old-sized body who happens to be 9!!!  I was surprised to see that he is only a little  bit taller than Leslie (who is 6).  Leslie and Justin both have grown during the summer, and Teddy must have pretty much stayed the same since our first trip, because in April, he was measuring right in the middle of them in height.  I'm sure that with time, he'll mature socially and mentally, and will get stronger and grow taller physically.  It will be so wonderful to see it all take place!
Posted by Christy Jacobsen at 9:26 PM