We didn't get to venture out too far today due to the weather.  I was thinking that lack of exercise and fresh air might make it harder for Teddy to get to sleep, but it actually seemed to be a little easier tonight.  Once he gets to sleep, he sleeps well, so I am very thankful for that!  Actually-- maybe I am just sleeping so hard that I don't hear him during the night!!  :)  No, I don't think so!
After a big breakfast, we played in the room for awhile.  Teddy wanted to take apart the airplane, and before we got it back together, he started using the pieces to make his own creations.  I was really glad to see that imagination.  The things he did were basic, but I was still glad to see him using those thinking skills!  The day before, I had been teaching  him how to "play" with a stuffed animal.  There were a few stuffed animals in his room in the orphanage, but they were just for decoration, I think.  I don't think he was allowed to play with them....  or maybe he just didn't really know how to.  Anyway, the first night when I put him to bed, I put the stuffed doggy in bed with him, and he just ignored it.  So, Tuesday morning I played with the dog lying beside Teddy.... making the dog wave and say "hi," making the dog dance while I sang, making him "walk" up one side of my bent knees and sliding down the other.  Teddy kept looking at me out of the corner of his eye like I was a little strange!!  Well, then, --last night when we put Teddy to bed, I put the dog in bed with him.....  and all my teaching back-fired on me.  I was now thinking of the doggy as a cuddly stuffed animal that you hold while you fall asleep.... but, NO--- now it was a toy that you play with!!  Teddy proceeded to play in bed with the doggy like I had showed him!  Fast learner--- Ha!  I guess now I'll have to demonstrate how -- when it's bedtime -- the doggy is VERY tired and he just wants to be cuddled and fall asleep!  :)
Anyway, after awhile we went down to Joey and Archie's room and played there.  When it was getting toward lunch time, the rain had stopped, and we were all a little stir crazy.  We decided to take a walk and look for a cafe.  After about 10 minutes, Toni called and said that she was sending Marti to get us all to bring us to a cafe beside her apartment building.  So, we walked back to the hotel to meet Marti!  Toni was looking better today -- better rested and feeling some better, I think.  We all stayed and talked there for an hour or 2, and by that time it was starting to rain again.  So, that was the end of our venturing out today.  We played in the room, skyped with family, ate supper with Joey and Archie in the downstairs restaurant, and started trying to settle down for bed time!
Teddy has been VERY content to be with us...  I am SO extremely thankful.  While he is mostly always content, he doesn't show lots of outward emotion (positive or negative--  We've never seen him cry, never seen him even act angry... only mildly frustrated).  So, a couple of times today, I saw a really big, full-fledged smile and laugh, and managed to get one on camera. 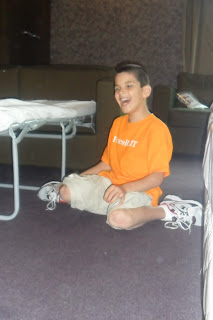 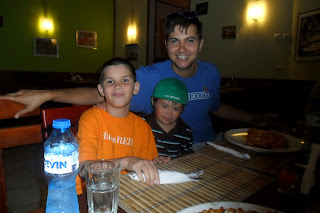 Teddy, Archie and Joey at lunch 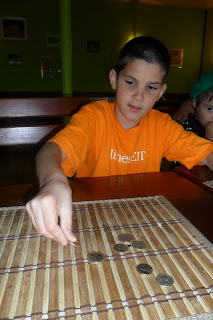 These are Teddy's current prize possession.  We gave him a few coins, I think Joey gave him a few, he found one or 2 down in the lobby, and has therefore gotten a collection of 8.  They stay in his pocket, and when he's bored, he brings them out.  We've made up all kinds of games to play with these coins.  He is really proud of them, and shows them off to complete strangers just about everywhere we go!  All but one are Bulgarian coins, and there's one quarter in the group.  With the quarter, we've taught him how to guess heads or tails."  He still doesn't really "get" it, but it sure keeps him entertained!!  :)
Posted by Christy Jacobsen at 3:23 PM