Monday morning we jumped into home schooling.  The kids and I would actually have started earlier than Monday if it hadn't been for our trip.  And, I felt like Teddy would do better with a pretty strong schedule, so we dove in.
Actually, I had already done the "first day of school" with the other kids on the Wednesday before Dan and I left.  We had our fun activity to kick off the year... this year it was a treasure hunt.  We've done it before, but this year I put a new twist on it....  the clues were scripture references, and they had to decide where to find the next clue by reading the verse and deciphering from it where to go look!  The treasure was school supplies that we needed for the year.  All kids love new notebooks, pencils (everyone gets his own color or pattern so that when we lose them all over the house, we know whose it is by the color!  -- I started that when the girls were much younger and they wouldn't keep up with their own pencil and would always be taking mine!! :)   )  notecard boxes, and other necessities.
We'd gotten out the new books for the year, and gone through the entire schedule so that at least they  would know what to expect even if Teddy was totally clueless!  Ha!  Naturally we had to change up our schedule somewhat this year because much more of my time is needed for him... but so far the kids are doing well taking on more responsibility for themselves.  Each year they get a little more independent in their studies anyway.
Teddy is doing very well considering that within the last week he has totally lost everything well known to him.... the place, people, food, smells, sounds, friends, bedroom, language (that alone will make you desperate!), and entire way of life!   The very positive things:  he likes all of our food (that really amazes me!), he has been motivated to be active (as opposed to only wanting to watch TV!), he has yielded to our authority (we're still a long way away from first time obedience - ha! - , but he's getting better and hasn't pitched any fits.... I thought I was going to see the first one this morning, but just when it started looking like it was coming on strong, he gave in.)  He is picking up English, and I can see a little improvement in communication every day (wow -- that's huge!)  He is sleeping well (that's another big one!)    The negative things:  we have to watch him constantly.  If you let him get out of sight, he'll get into something in a flash.  He plunders through people's closets and cabinets and easily breaks things as he "explores."  We've had to child proof the house almost as if he were a toddler, but since he's big and can climb, it's not quite as easy to get things out of reach.  He has a few phrases in English that he uses sometimes out of context and can be obnoxious with it.  He has a few orphanage behaviors and a few other attention-seeking behaviors that will need time and patience to eliminate.
Over all, it is going really well.  Whenever I feel tired or frustrated, I try to remind myself of where we could  be!!  He could  be pitching major fits of frustration all day every day....  and wouldn't I be doing about the same thing if MY whole life had just turned upside- down???  So, I'm praising God tonight for His mercy!  I know that He won't give me more than I can handle....  so, He must know that I just couldn't handle too awful much right now!  :) 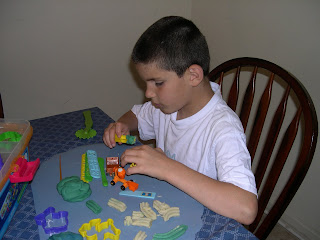 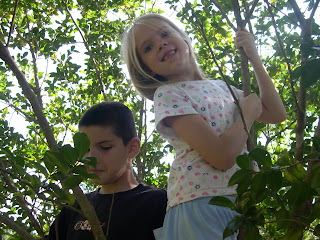 Climbing trees is one of his newest favorite activities.... second only to pushing buttons!  It's almost like I can see him stronger today than yesterday!  He needs all this climbing to build up his leg and arm strength. 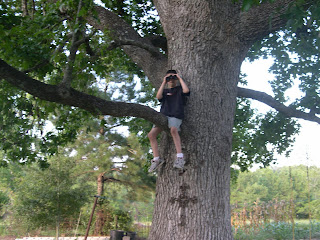 He was VERY determined to make it up in this tree.  This afternoon, he kept at it until he finally made it!  Here is looking at me through binoculars!!
Posted by Christy Jacobsen at 9:45 PM