This has been one HOT week.  It didn't help that our A.C. thermostat went out earlier in the week.  One day the girls told me that it didn't seem to be acting right, and we started to be concerned when it wasn't staying on in spite of the temperature rising.  By the time Dan and I went upstairs to go to bed, it was 84 degrees up there.  Obviously I was tired enough that it didn't even phase me, though, because we opened all the windows, turned on the attic fan, and I went promptly to sleep!!  The next day, I called the guy we knew who might could help us out with it.  He was near a supply store just when I called, and when I told him the "symptoms," he guessed what the problem was, bought us a new thermostat, and was here to install it within a few hours!!  Praise the Lord!!  The very next day, the high temperature was 101.5.... and that was before adding humidity/heat index! 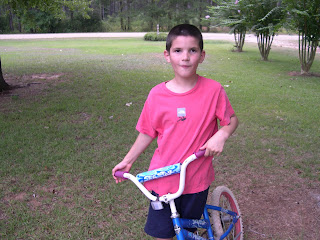 So, all week long, I stood in the shade--  pouring sweat -- just watching  Teddy learning to ride the bike.  I don't know how he stood it, but he has almost gotten the hang of riding decently well. 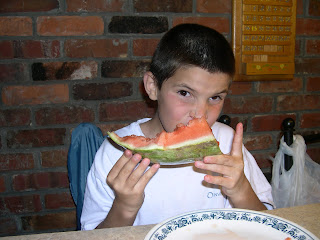 Watermelon is great  on a hot day!!  Unfortunately, he must have eaten too much on this day, because he threw up not long after I took this picture--  :(
Teddy continues to make pretty good progress learning English.  After church today, I decided that this week we would learn some new phrases like, "Don't yell in church!"  I realized that this would be needful since -- 1/3 of the way through the service, he saw my dad, and called out loudly, "GRANDDADDY!!!"  We were sitting on the back row just in case he got too noisy or was distracting others.  Other than that one thing, he was pretty good, though.  We'd had a battle at the beginning because he didn't want to sit in the back.  There wasn't room for our whole family there, so some of our other kids were sitting toward the front, and he wanted to sit with them.  He was quite angry with me, and pouted for awhile, and then ended up crying for a few minutes.  But, he got over it.  Next time, I plan to go into the sanctuary early and explain better about why  we are sitting where we are, and how he can "earn" the right to sit with the rest of the kids by using good behavior.
We have at least one battle a day.  So far, there has always been something to use as good leverage in order to get him to give in to what I'm asking him to do.  It takes awhile though.  He puts up a good fight, but eventually, whatever it is that he is missing out on until he gives in pushes him over the edge and he yields.

He got his glasses yesterday.  All day on Friday he asked if we were going in the car.  Driving meant that we would go pick up his glasses.  Before that, driving had meant that we might go swimming.  So, when I told him that we'd get his glasses the next day, but that we WOULD cool off on that hot day by going to the pool, he liked the trade quite well!!  (forgot to take along the camera that day again, though!) 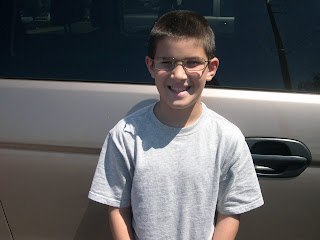 So here he is --- very proud of his new glasses!!  Afterwards, we really needed to go by Wal*mart.  While there, I fully expected him to stop every single stranger and show them his glasses!!  I was pleasantly surprised to see that he didn't approach ONE single stranger.  What a change!!  I (mistakenly) thought that we might  be making progress in that area....  only to see that at church this morning, he stopped at least 15 people (most were strangers to him) and showed them his glasses.  So, apparently, the lack of "people approaching" yesterday was all on the account of being thoroughly overwhelmed/overstimulated by Wal*mart, and all of the "stuff" it contained (in spite of the fact that we DID avoid the toy area and stayed only with the aisles that we absolutely needed!)
Here are just a few more pictures of the week... (Week 2 as a Jacobsen!!) 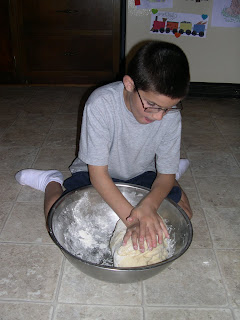 Helping me make bread--  This seems to be a good activity to work on wrist and arm strength!!  :) 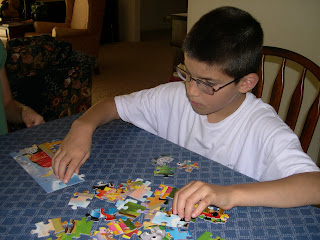 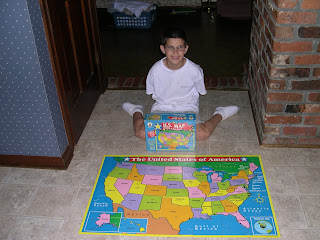 He worked on puzzles this afternoon -- with some help from Sarah.  He did a really good job, though.  This was obviously not the first time he had tried to put a puzzle together, though.  I really don't imagine that they had them at his orphanage.... so maybe he had done some at school.
So, I'm getting set for a new week.  The weekend usually throws him off a bit because we don't follow our normal (school) schedule.  I'll brace myself for a battle or 2 tomorrow!! :)  It definitely helps to keep in mind all of the things he is accomplishing ... and the stress of the battles stays in perspective.
Posted by Christy Jacobsen at 10:39 PM