When we got up this morning, Teddy was limping terribly.  He would not bend his right leg at the knee at all.  He always limps somewhat.  I can't remember what I posted here during/after our first trip, but he was born with a club foot, and the surgery to help correct it wasn't done until he was 6 or 7 years old.  So, he walked improperly for years, and still isn't very steady.  Anyway, I thought maybe he had just slept in a weird position, and that it would get better.  Actually after we had lunch and had been sitting still for quite awhile, when we got up to go back to our room, he limped even worse than before.  Finally, Dan happened to remember that his right thigh was where the doctor had given him the shot!!  Well, that was a relief!  He was just sore in that leg, and was favoring it a lot!  Apparently the least little bit of pain when he tried to move his thigh kept him from wanting to walk normally!  We went to the park again with Archie and Joey.  Today the weather is gorgeous, but Teddy wasn't into running or kicking the ball....  he did climb on all the concrete figures of animals, but then he just wanted us to throw Archie's tennis ball to him, and if he missed it, he wanted US to run after it!
We came back to the hotel to rest for awhile, and Teddy actually played by himself for awhile.  That was nice to see.  Pretty much up till now, he wanted us to be entertaining him non-stop!  The thing was, if we tried to get him to do something by himself and took our eyes off him for even a minute, he'd be getting into something we didn't want him to be playing with.  Today he actually played with his toys and left everything else alone!!  I think that he's getting used to our routine, and everything isn't quite so brand new and incredibly interesting.  Of course, the bad part of that is that when we get home, we'll have to start all over!  ha!  At least I've seen that it is possible for him to settle down and let us actually pay attention to something else for awhile!  Even when it gets really busy at home, I'll know that I can expect things to get better in a week or so!!  :)
Around 4:00 pm, DiDi is going to come with Teddy's passport and visa.  I'm not sure what we'll do for the rest of the afternoon, but I'm not going to post again now until we get home.  We'll get up in the morning at 4:15 and head to the airport.  We don't land in Montgomery until 9 pm tomorrow night....  we have several long lay-overs that are making this trip home 5-6 hours longer than our first trip.
Here are a few snapshots of earlier in the day--- 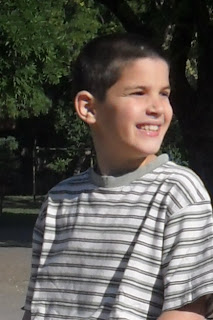 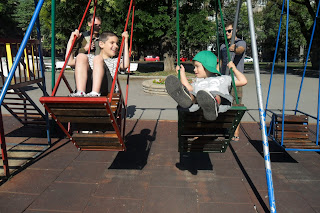 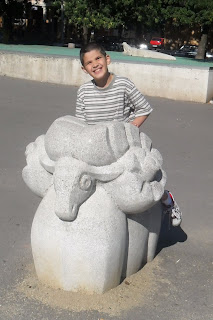 Posted by Christy Jacobsen at 10:22 AM