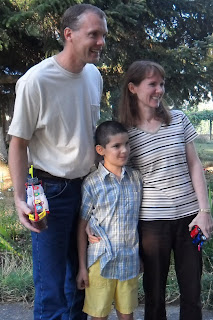 For months, I have read blogs similar to mine today, and have teared up every single time I read the blog title “gotcha!”  I could hardly wait until I would be the one typing it!!  And, it felt just as incredible as I thought it would!!  Every last piece of paperwork, every tear of frustration, every single fingerprint, and everything else….  It was ALL worth it when our sweet little boy said “chiao” to the life of an orphan and rode off in the van between me and his daddy!
He never hesitated a second, but of course he truly had no idea what all was about to change in his life forever, either!  It was all the orphanage director and one particular caretaker could do to hold it together.  I could tell both of them (and others) loved Teddy so very much, and were doing all they could to be brave and wish him the best with smiles on their faces even if their hearts were sad to see him go. 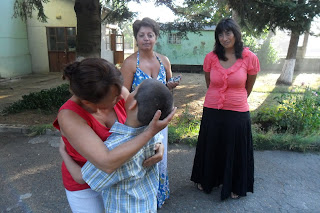 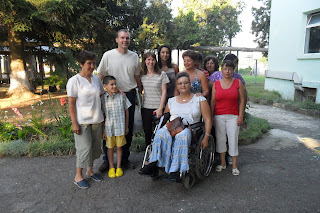 We’d been warned about his car sickness from the beginning, and they’d already given him some medicine before we got there.  I guess they might as well have saved their medicine, because it surely didn’t seem to work!  However, maybe it WAS working, and it spared us even more than he could have had, but it really wasn’t long before there wasn’t anything left to come up.  Poor guy—but he was such a trooper, and managed to give us enough fair warning every time!  (We HAD packed extra outfits for everyone just in case!  Speaking of outfits, the orphanage director was SO nice, and had given him the outfit he had on -- shoes and all, as well as 3 toys that Teddy chose to take.)
Teddy had never been out of a 45 mile radius from his current home, so you can imagine how LONG a six hour journey felt to a car sick nine year old!  He turned into a normal American kid right away with the favorite question of “Are we THERE yet?!”  In fact, telling us that he needed to throw up and asking Toni how much longer were about the only 2 different sentences that came out of his mouth for the entire trip!  We finally made it to , though, and were all glad when the city came into view. 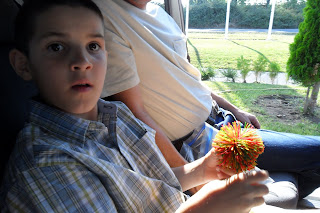 After Teddy had his picture made for his visa and Marti exchanged money for us, we were let off at the hotel to start the journey of the week of just the 3 of us. Toni tried to prepare Teddy, and told him everything that he could expect.  She said that we were going to stay in a hotel for a few days, and his response was, “ Does it have a TV?”  You might have read my post about how Shelley told me that basically he watched TV all day and all evening until he fell asleep.  He rattled off a long sentence of which Dan and I understood nothing!  Ha!  To my dismay, Toni translated that he had just recited a list of all the soap operas that he watches!  UUGGHH!!  Well, little guy—brace yourself, because you’re in for a of life changes!  Hmmmm, let’s start with that one!!  J
We got to our room and he went straight for the TV.  We opted to go for a walk to get something to eat!!  It was almost 3 o’clock and we hadn’t had anything to eat since breakfast (and Teddy, of course, had lost his breakfast!)  We went to a little grocery shop a few blocks away.  Immediately in the door, TV was not the ONLY thing to which we were saying “no’!!  He wanted to buy it all….  He wanted one of everything!  And, while Dan and I aren’t usually indulgent parents, we DID walk out of that store with ice cream, oreos, Sprite and crackers (yum!  Aren’t we into balanced diets?!)  HA!  We sat right outside the store and let him eat his ice cream, and I started the crackers.  This was where I'd had one of my brain lapses and had left my camera in the hotel room!  I'd love to show you a picture of his first ice cream cone with us.  From the way he gobbled it down, though, it really looked like he'd had one before.  He didn't let one little drip get by him....   Now that I'm thinking of it, -- a video would have been better yet!!  :)
When he was done, we walked back to the hotel.  Once there, he started into the crackers…. and didn’t stop for the next 2 hours…. And that was only because we were going downstairs for pizza!!  Let’s just say Teddy is going to make up for lost time!  He definitely is going to be one of the ones that the adoption books talk about when they say that some kids don’t know what it feels like to feel “full,” and they proceed to eat you out of house and home.  Better look out Justin, --the new guy in the family is out to give you a run for your money!! 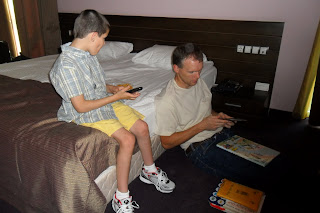 ﻿
Here is he holding the TV remote in one hand, and his crackers in the other!  After putting him off for quite awhile, we decided we would  turn on the TV for a little while.  We were quite relieved to discover that it wasn't so much about watching the TV shows as it was changing channels with the remote.....  then, hitting the mute button and watching them go silent.... then turning it off and back on again!!  This little guy is REALLY into buttons!!  I was just so thankful that he didn't seem to care at all about the programs that I felt quite happy to let him push the buttons even if we did get dizzy watching the channels flip!!  Ha!
The cutest thing by far, though, was getting to Skype with our kids at home.  He had walked into the hotel and promptly asked the receptionist where Anna, Sarah, Rachel, Justin, and Leslie were!!!  He had thought that after all THAT long journey, we were home, and that the other kids should be there!!  When they came up on the computer screen, he actually recognized them right away, and ran to get the pictures that he had of them, and show them all their own pictures so that they could see that he knew who they were!!  :)  Then, he realized that he could see himself on the little insert video of us, and the real fun began....  He could actually watch himself on "TV!!"
After a MEGA pizza for supper with new friends we'd made in the hotel (more on that tomorrow!), we came back to the room and Teddy enjoyed a bath (I'm pretty sure he'd only had showers at the orphanage.... so this was like a pool!!) and then had to go to bed...  Daddy and I were exhausted!  Ha!  Teddy groaned and complained a little bit about that, but gave in.  I was just going to lie in bed for a little while and wait until he was asleep when I could post here on the blog in peace.....  but, -- you guessed it!!  I went straight to sleep, too!!  I woke up about an hour and 1/2 ago which is why it is now after midnight here and I'm just now getting to my post!!
I have so much more to tell, but it will have to wait!  I can hear him tossing around on his bed, and I don't want to risk his waking up to join me (I'm sitting on the bathroom floor trying to be as quiet as possible!)  So, I'm off to get some more sleep to ensure that Dan and I both have enough energy to keep up with him tomorrow!
Posted by Christy Jacobsen at 4:20 PM